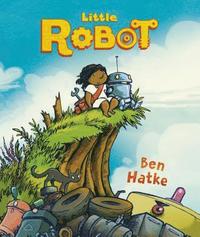 av Ben Hatke
Inbunden Engelska, 2015-08-10
189
Köp
Spara som favorit
A lonely girl befriends a sweet little robot in this brand new adventure from Zita the Spacegirl author Ben Hatke! When a little girl finds an adorable robot in the woods, she presses a button and accidentally activates him for the first time. Now, she finally has a friend. But the big, bad robots are coming to collect the little guy for nefarious purposes, and it's all up to a five-year-old armed only with a wrench and a fierce loyalty to her mechanical friend to save the day!
Visa hela texten

A Kirkus Best Middle Grade Book of 2015A Texas Little Mavericks Title"A tale of friendship and the joys of tinkering." "The New York Times"The absolute best thing ever." "io9"Girls meets robot. Robot meets girl. Girl and robot become unlikely best friends ... and take on the world." "Entertainment Weekly" Ben is awesome, and so are his books! Kazu Kibuishi, author of the Amulet series Tonight s bedtime story. Rainbow Rowell, author of "Fangirl" Girl power at its best. A sure winner! "Kirkus Reviews, starred review" A pleasantly colorful adventure of discovery and friendship. Highly recommended. "School Library Journal," starred review Subtly inventive in both vision and execution, this one begs to be read again and again. "Booklist," starred review Well-plotted and -paced, this engaging story of loneliness, bravery, and friendship builds to a satisfying and sweet conclusion. "The Horn Book"Hatke s got a knack for early elementary graphic novels, and the unnamed protagonist here is just as endearing, memorable, and clever as Zita (from Zita the Spacegirl)." "The Bulletin of the Center for Children's Books"

Ben Hatke is the author and illustrator of the "New York Times "bestselling "Zita the Spacegirl "graphic novel trilogy and the picture book "Julia's House for Lost Creatures. "He lives and works in the Shenandoah Valley with his wife and their boisterous pack of daughters. His latest book is "Little Robot."