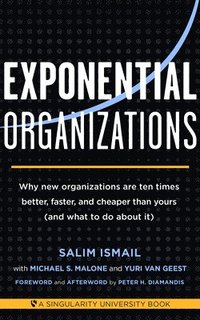 Why New Organizations are Ten Times Better, Faster, and Cheaper Than Yours (and What to Do About it)

av Salim Ismail, Michael S Malone, Yuri Van Geest
(1 röst)
Häftad Engelska, 2014-10-30
206
Köp
Spara som favorit
Kan tyvärr inte längre levereras innan julafton.
Finns även som
Visa alla 1 format & utgåvor
Frost & Sullivan's 2014 Growth, Innovation, and Leadership Book of the Year In business, performance is key. In performance, how you organize can be the key to growth. In the past five years, the business world has seen the birth of a new breed of company-the Exponential Organization-that has revolutionized how a company can accelerate its growth by using technology. An ExO can eliminate the incremental, linear way traditional companies get bigger, leveraging assets like community, big data, algorithms, and new technology into achieving performance benchmarks ten times better than its peers. Three luminaries of the business world-Salim Ismail, Yuri van Geest, and Mike Malone-have researched this phenomenon and documented ten characteristics of Exponential Organizations. Here, in EXPONENTIAL ORGANIZATIONS, they walk the reader through how any company, from a startup to a multi-national, can become an ExO, streamline its performance, and grow to the next level. Chosen by Benjamin Netanyahu, Prime Minister of Israel, to be one of Bloomberg's Best Books of 2015
Visa hela texten

"EXPONENTIAL ORGANIZATIONS is the most pivotal book in its class. Salim examines the future of organizations and offers readers his insights on the concept of Exponential Organizations, because he himself embodies the strategy, structure, culture, processes, and systems of this new breed of company."-John Hagel, The Center for the Edge "EXPONENTIAL ORGANIZATIONS should be required reading for anyone interested in the ways exponential technologies are reinventing best practices in business."-Ray Kurzweil, Director of Engineering at Google

Salim Ismail is the founding Executive Director at Singularity University, where he moderates most academic programs, and is its current Global Ambassador. Before that, as a vice president at Yahoo, he built and ran Brickhouse, Yahoo's internal incubator. His most recent company, Angstro, was sold to Google in August 2010. He has founded or operated seven early-stage companies including PubSub Concepts, which laid some of the foundation for the real-time web. He also spent several years as a management consultant with CSC Europe and later with ITIM Associates. Ismail holds a B.Sc. in Theoretical Physics from the University of Waterloo in Canada. Michael S. Malone is one of the world's best-known technology writers. He has covered Silicon Valley and high-tech for more than 30 years, beginning with the San Jose Mercury News as the nation's first daily high-tech reporter. Malone's articles and editorials regularly appear in the Wall Street Journal. He was editor of Forbes ASAP, the world's largest-circulation business-tech magazine, at the height of the dot-com boom. Malone is the author or co-author of nearly twenty award-winning books and television series, notably the best-selling The Virtual Corporation, Bill and Dave: How Hewlett and Packard Built the World's Greatest Company, and The Future Arrived Yesterday: The Rise of the Protean Corporation and What It Means For You. Malone holds an MBA from Santa Clara University, where he is currently an adjunct professor in professional writing. He is also an associate fellow of the Said Business School at Oxford University, and is a Distinguished Friend of Oxford. Yuri van Geest is an international keynote speaker, boardroom consultant, the managing director of the Singularity University Summit Europe, the Dutch Ambassador for Singularity University and a double alumnus of Singularity's programs. He holds a M.Sc. degree in strategic management and marketing from Erasmus University Rotterdam and has been a key figure, firestarter and organizer in the global Lean Startup, Quantified Self, TEDx and Mobile Monday movements. He has consulted for Google, ING Bank, Vodafone Group, Adidas Global, Philips Global, Heineken Global, Friesland Campina, Samsung and MIT, and was a key member of the Topteam Creative Industry within the Dutch Ministry of Economic Affairs, Agriculture and Innovation for two years. Peter H. Diamandis is a serial entrepreneur having co-founded 15 companies, most notably the X Prize Foundation, Singularity University and Planetary Resources. He has a molecular biology and aerospace engineering degree from MIT and an MD from Harvard. He is also the co-author of the New York Times bestselling book, Abundance: The Future Is Much Better Than You Think, which is recommended pre-reading for those interested in Exponential Organizations. CNN and Fortune just named Peter Diamandis one of "The World's 50 Greatest Leaders."