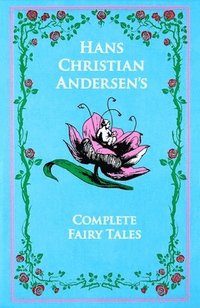 av Hans Christian Andersen
Inbunden Engelska, 2014-10-23
241
Köp
Spara som favorit
Skickas inom 5-8 vardagar.
Gratis frakt inom Sverige över 159 kr för privatpersoner.
Classic tales of fairies and princesses, ducklings and dancing shoes from the master storyteller Hans Christian Andersen. All the best-loved fairy tales of Hans Christian Andersen, including "The Ugly Duckling," "Thumbelina," "The Red Shoes," "The Princess on the Pea," and "The Emperor's New Clothes," fill the pages of this beautiful leather-bound collector's edition. Also included is "The Tallow Candle"-one of the earliest stories written by Andersen, just discovered recently! A great book of bedtime stories or for rainy day reading, as there are both short and long anecdotes included. The attached bookmark ribbon ensures you'll never lose your place as you wander through the imagination of one of the most popular children's writers of all time. Curl up with this collection of classics and lose yourself in childhood memories.
Visa hela texten

One of the most prolific and beloved writers of all time, Danish poet and author Hans Christian Andersen is best known for his fairy tales. Born in Odense, Denmark, in 1805, Andersen published his first story at 17. In all, he wrote more than 150 stories before his death in 1875. Kenneth C. Mondschein has a Ph.D in history from Fordham University (defense passed December 18, 2009). His expertise is in Western history from antiquity to the present, with a specializations in the Middle Ages and Renaissance, global expansion and colonization, and the history of science and technology. He also holds a Master of Arts in History from Boston University. Born in Denmark in 1886, Jean P. Hersholt became a film and radio star in the United States. He also translated more than 160 Hans Christian Andersen fairy tales into English.