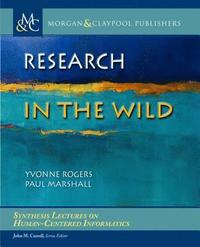 Research in the Wild

av Yvonne Rogers, Paul Marshall
Häftad Engelska, 2017-03-30
559
Köp
Spara som favorit
Skickas inom 5-8 vardagar.
Fri frakt inom Sverige för privatpersoner.
Finns även som
Visa alla 2 format & utgåvor
The phrase ""in-the-wild"" is becoming popular again in the field of human-computer interaction (HCI), describing approaches to HCI research and accounts of user experience phenomena that differ from those derived from other lab-based methods. The phrase first came to the forefront 20-25 years ago when anthropologists Jean Lave (1988), Lucy Suchman (1987), and Ed Hutchins (1995) began writing about cognition being in-the-wild. Today, it is used more broadly to refer to research that seeks to understand new technology interventions in everyday living. A reason for its resurgence in contemporary HCI is an acknowledgment that so much technology is now embedded and used in our everyday lives. Researchers have begun following suit-decamping from their usability and living labs and moving into the wild; carrying out in-situ development and engagement, sampling experiences, and probing people in their homes and on the streets. The aim of this book is to examine what this new direction entails and what it means for HCI theory, practice, and design. The focus is on the insights, demands and concerns. But how does research in the wild differ from the other applied approaches in interaction design, such as contextual design, action research, or ethnography? What is added by labeling user research as being in-the-wild? One main difference is where the research starts and ends: unlike user-centered, and more specifically, ethnographic approaches which typically begin by observing existing practices and then suggesting general design implications or system requirements, in-the-wild approaches create and evaluate new technologies and experiences in situ(Rogers, 2012). Moreover, novel technologies are often developed to augment people, places, and settings, without necessarily designing them for specific user needs. There has also been a shift in design thinking. Instead of developing solutions that fit in with existing practices, researchers are experimenting with new technological possibilities that can change and even disrupt behavior. Opportunities are created, interventions installed, and different ways of behaving are encouraged. A key concern is how people react, change and integrate these in their everyday lives. This book outlines the emergence and development of research in the wild. It is structured around a framework for conceptualizing and bringing together the different strands. It covers approaches, methods, case studies, and outcomes. Finally, it notes that there is more in the wild research in HCI than usability and other kinds of user studies in HCI and what the implications of this are for the field.
Visa hela texten

Bloggat om Research in the Wild

Yvonne Rogers is the director of the Interaction Centre at UCL (UCLIC), and a deputy head of the Computer Science department at UCL. Her research interests lie at the intersection of physical computing, interaction design, and human-computer interaction. Much of her work is situated in the wild--concerned with informing, building and evaluating novel user experiences through creating and assembling a diversity of technologies (e.g., tangibles, Internet of Things) that augment everyday, learning, community engagement and collaborative work activities. She has been instrumental in promulgating new theories (e.g., external cognition), alternative methodologies (e.g., in the wild studies), and far-reaching research agendas (e.g., Being Human: HCI in 2020 manifesto), and has pioneered an approach to innovation and ubiquitous learning. She has published over 250 articles, including her Morgan & Claypool monograph HCI Theory: Classical, Modern and Contemporary. She is a co-author of the definitive textbook on Interaction Design and HCI now published in its 4th edition that has sold over 150,000 copies worldwide and has been translated into 6 languages. She is a fellow of the BCS and the ACM CHI Academy. Paul Marshall is a senior lecturer in interaction design at University College London. He received his DPhil from the University of Sussex and a BSc from the University of Edinburgh. From 2011 to 2012 he was a research fellow at the University of Warwick, and from 2006-2010 was a research fellow at the Open University Pervasive Interaction Lab. His research interests center on the design and evaluation of technologies that extend and augment individual human capabilities in the wild. This has included work on physical interaction and tangible interfaces; on technologies for face-to-face collaboration; on the design of technologies to fit specific physical contexts; and on extended cognition and perception. A recent focus has been on how communities and individuals use data for better understanding or well-being. John M. Carroll is Distinguished Professor of Information Sciences and Technology at Penn State University, and was a founder of human-computer interaction. He served on the program committee of the 1982 Bureau of Standards Conference on the Human Factors of Computing Systems that in effect inaugurated the field and was the direct predecessor of the field's flagship conference series, the ACM CHI Conferences. Through the past two decades, Carroll has been a leader in the development of the field of Human-Computer Interaction. In 1984 he founded the User Interface Institute at the IBM Thomas J.Watson Research Center, the most influential corporate research laboratory during the latter 1980s. In the 1994, he joined Virginia Tech as Department Head of Computer Science where in 1995 he led the effort to form the university's Center for Human-Computer Interaction. That year, Virginia Tech was invited to join the Human-Computer Interaction Consortium, a group of the leading corporate and academic HCI research organizations in the world. He has written more than 250 technical papers, more than 25 conference plenary addresses, and 13 books, including HCI Models, Theories, and Frameworks, and Usability Engineering (with Mary Beth Rosson). He serves on 10 editorial boards for journals and handbooks, and is the current editor-in-chief of ACM Transactions on Computer- Human Interaction (ToCHI). He has won the Rigo Career Achievement Award from ACM (SIGDOC), received the Silver Core Award from IFIP, and is a member of the CHI Academy. In 2003 he became the fifth recipient of the CHI Lifetime Achievement Award, the most prestigious research award in HCI.

Acknowledgments Introduction Moving Into The Wild: From Situated Cognition to Embodied Interaction Approaches to Conducting Research in The Wild Case Studies: Designing and Evaluating Technologies for Use in the Wild Practical and Ethical Issues Conclusions References Author Biographies