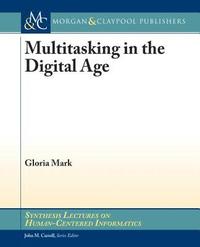 Multitasking in the Digital Age

av Gloria Mark
Häftad Engelska, 2015-04-30
649
Köp
Spara som favorit
Skickas inom 5-8 vardagar.
Fri frakt inom Sverige för privatpersoner.
Finns även som
Visa alla 2 format & utgåvor
In our digital age we can communicate, access, create, and share an abundance of information effortlessly, rapidly, and nearly ubiquitously. The consequence of having so many choices is that they compete for our attention: we continually switch our attention between different types of information while doing different types of tasks--in other words, we multitask. The activity of information workers in particular is characterized by the continual switching of attention throughout the day. In this book, empirical work is presented, based on ethnographic and sensor data collection, which reveals how multitasking affects information workers' activities, mood, and stress in real work environments. Multitasking is discussed from various perspectives: activity switching, interruptions as triggers for activity switching, email as a major source of interruptions, and the converse of distractions: focused attention. All of these factors are components of information work. This book begins by defining multitasking and describing different research approaches used in studying multitasking. It then describes how multiple factors occur to encourage multitasking in the digitally-enabled workplace: the abundance and ease of accessing information, the number of different working spheres, the workplace environment, attentional state, habit, and social norms. Empirical work is presented describing the nature of multitasking, the relationship of different types of interruptions and email with overload and stress, and patterns of attention focus. The final chapter ties these factors together and discusses challenges that information workers in our digital age face.
Visa hela texten

Gloria Mark is a Professor in the Department of Informatics, University of California, Irvine. Her research focuses on studying the impact that digital technology has on people in real-world settings. She uses a range of sensors, biosensors, and other measures to conduct precision tracking of information workers' digital media use, focus, and mood. She received her Ph.D. in Psychology from Columbia University. She has worked at the German National Research Center for Information Technology (now Fraunhofer Institute) and has been a visiting researcher at Microsoft Research, IBM, Boeing, and The MIT Media Lab. In 2006 she received a Fulbright scholarship where she worked at the Humboldt University in Berlin, Germany. She has been the technical program chair for the premiere ACM CSCW'12, ACM CSCW'06, and ACM GROUP'05 conferences, has won and been nominated for best paper awards, and is on the editorial board of the top journals in the field of human-computer interaction: ACM TOCHI and Human-Computer Interaction. Her work has appeared in the popular press such as The New York Times, the BBC, NPR, Time, and The Wall Street Journal, and she was invited to speak at the South x Southwest (SXSW) conference.