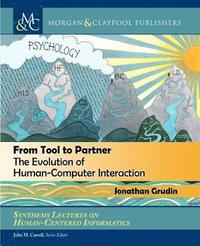 From Tool to Partner

The Evolution of Human-Computer Interaction

av Jonathan Grudin
Häftad Engelska, 2016-12-30
619
Köp
Spara som favorit
Skickas inom 5-8 vardagar.
Fri frakt inom Sverige för privatpersoner.
Finns även som
Visa alla 3 format & utgåvor
This is the first comprehensive history of human-computer interaction (HCI). Whether you are a user-experience professional or an academic researcher, whether you identify with computer science,human factors, information systems, information science, design, or communication, you can discover how your experiences fit into the expanding field of HCI. You can determine where to look for relevant information in other fields-and where you won't find it. This book describes the different fields that have participated in improving our digital tools.It is organized chronologically, describing major developments across fields in each period. Computer use has changed radically, but many underlying forces are constant. Technology has changed rapidly, human nature very little. An irresistible force meets an immovable object. The exponential rate of technological change gives us little time to react before technology moves on. Patterns and trajectories described in this book provide your best chance to anticipate what could come next. We have reached a turning point. Tools that we built for ourselves to use are increasingly influencing how we use them, in ways that are planned and sometimes unplanned. The book ends with issues worthy of consideration as we explore the new world that we and our digital partners are shaping.
Visa hela texten

"I believe the book is successful in its aim to present a reasonably balanced narrative of the emergence of human factors as a consideration in technological discourse... I would recommend this book to students, pundits, and those new to industries where the current digital technologies are fundamental to their success." - Robert Willis, Vancouver Island University

Bloggat om From Tool to Partner

Jonathan Grudin's history connected to computer history on a school field trip, when he played blackjack against a huge computer at Battelle Laboratories in Columbus, Ohio. Perhaps a vacuum tube had burned out. The computer claimed to have won when it had not, convincing Jonathan that computers were impressive but not infallible. While in high school, he taught himself to write programs, enter them on punch cards, and run them on a nearby college's sole computer, unused in the evenings and on weekends. His first program found twin primes; his second constructed random bridge hands. Jonathan majored in mathematics-physics at Reed College and obtained an M.S. in mathematics at Purdue University. After working as a programmer at Wang Laboratories and Stanford University, he obtained a Ph.D. in cognitive psychology, working with Don Norman at the University of California, San Diego and spending two of his summers at the MIT Artificial Intelligence Laboratory. During a two-year postdoc at the Medical Research Council Applied Psychology Unit in Cambridge, he conducted his first human-computer interaction studies with Phil Barnard and Allan MacLean. He returned to work as a software engineer at Wang Laboratories and team leader at the artificial intelligence-oriented Microelectronics and Computer Technology Corporation consortium in Austin, Texas. From 1989 to 1991, he was a visiting professor at Aarhus University. His first exploration of the field's history, in the library next to his office, was to determine the origin of the waterfall model of software development. From 1992 to 1998, he was a professor of information and computer science at the University of California, Irvine. He spent six-month sabbaticals at Keio University and the University of Oslo. In 1998, he joined Microsoft and became an affiliate professor at the University of Washington Information School. Jonathan is an ACM Fellow and member of ACM SIGCHI's CHI Academy. He has participated in CHI and CSCW since their first conferences. His CSCW 1988 paper on the challenges in designing technology to support groups won the first CSCW Lasting Impact Award in 2014. Penn State University