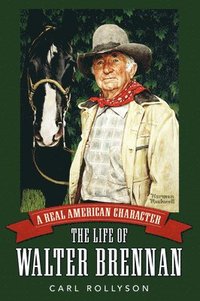 The Life of Walter Brennan

av Carl Rollyson
Inbunden Engelska, 2015-09-10
379
Köp
Spara som favorit
Kan tyvärr inte längre levereras innan julafton.
Finns även som
Visa alla 2 format & utgåvor
Walter Brennan (1894-1974) was one of the greatest character actors in Hollywood history. He won three Academy Awards and became a national icon starring as Grandpa in The Real McCoys. He appeared in over two hundred motion pictures and became the subject of a Norman Rockwell painting, which celebrated the actor's unique role as the voice of the American Western. His life journey from Swampscott, Massachusetts, to Hollywood, to a twelve thousand-acre cattle ranch in Joseph, Oregon, is one of the great American stories. In the first biography of this epic figure, Carl Rollyson reveals Brennan's consummate mastery of virtually every kind of role while playing against and often stealing scenes from such stars as Gary Cooper, Humphrey Bogart, and John Wayne. Rollyson fully explores Brennan's work with Hollywood's greatest directors, such as Howard Hawks, John Ford, and Fritz Lang. As a father and grandfather, Brennan instilled generations of his family with an outlook on the American Dream that remains a sustaining feature of their lives today. His conservative politics, which grew out of his New England upbringing and his devout Catholicism, receive meticulous attention and a balanced assessment in A Real American Character. Written with the full cooperation of the Brennan family and drawing on material in archives from every region of the United States, this new biography presents an artist and family man who lived and breathed an American idealism that made him the Real McCoy.
Visa hela texten

"Unsung character actors finally get a long-overdue close-up in A Real American Character, Carl Rollyson's authoritative portrait of Walter Brennan. A real Hollywood success story, Brennan and his extraordinary career, which included winning three Oscars, are presented with great sympathy, sensitivity, and admiration." --Marion Meade, author of The Unruly Life of Woody Allen and Buster Keaton: Cut to the Chase "Here at last is an impassioned tribute to the Hollywood character actor Walter Brennan. From the counter at Dad Kelly's Corned Beef Parlor, where he hung out as a silent extra, to the sound sets of William Wyler, Frank Capra, and Howard Hawks, the man and actor come vibrantly alive in this thoughtful biography. Meticulously researched and written in Rollyson's always fluent and engaging prose, A Real American Character analyzes the many shades of Brennan's Hollywood persona while giving a clear-eyed view of the actor as both a fanatic anti-communist and family man par excellence." --Diane Jacobs, author of Christmas in July: The Life and Art of Preston Sturges and, most recently, Dear Abigail, a biography of Abigail Adams and her two sisters

Carl Rollyson, Cape May County, New Jersey, is the advisory editor of the Hollywood Legends Series from University Press of Mississippi and the author of several biographies, including Marilyn Monroe: A Life of the Actress and Hollywood Enigma: Dana Andrews (both published by University Press of Mississippi); American Isis: The Life and Art of Sylvia Plath; and Amy Lowell Anew: A Biography. He is also a professor of journalism at Baruch College, the City University of New York.