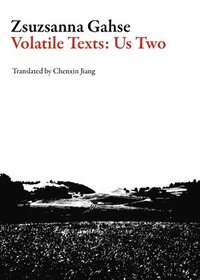 av Zsuzsanna Gahse
Häftad Engelska, 2017-02-24
159
Köp
Spara som favorit
Skickas inom 7-10 vardagar.
Fri frakt inom Sverige över 159 kr för privatpersoner.
The narrator of Volatile Texts: Us Two falls in love with Pierre, the book's secret protagonist. During their trysts she rediscovers Switzerland, a place where every valley has its own language and every person is translated. It's a perfect microcosm of Europe-a collection of accents, languages, and landscapes. Volatile Texts is Zsuzsanna Gahse's ironic and prescient meditation on a Europe that is disintegrating in the same way that the Alps disintegrate into individual lakes and valleys. Yet language itself is the true subject of these prose miniatures, which are volatile and unstable because they expose language as an arbitrary construct made of interchangeable parts; however, this is also what makes the book such an exciting read.
Visa hela texten

Zsuzsanna Gahse was born in 1946 in Budapest, from which she fled with her parents to Austria during the 1956 revolution. She grew up in Vienna and Kassel, and currently lives in Switzerland. She has published twenty-five books, and has translated the works of Hungarian writers such as Zsuzsa Rakovszky und Istvan Voeroes into German. Recent works include JAN, JANKA, SARA und ich (Edition Korrespondenzen, 2015) and More Than Eleven, an opera libretto for mezzosoprano. She has received numerous prizes for her work, including the Aspekte-Literaturpreis (1983) and the Adelbert-von-Chamisso-Preis (2006). Since 2011 she has been a member of the Deutsche Akademie fur Sprache und Dichtung. Chenxin Jiang was born in Singapore and grew up in Hong Kong. She has been awarded a PEN/Heim Translation Fund grant for Ji Xianlin's The Cowshed (New York Review Books, 2016), as well as the 2011 Susan Sontag Prize for Translation for her work on Goliarda Sapienza. Chenxin is the Senior Editor covering Chinese writing at Asymptote, an online journal of contemporary literature in translation. She studied comparative literature at Princeton University.