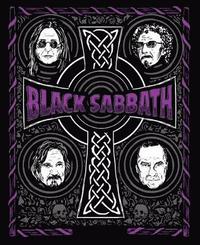 The Complete History of Black Sabbath

av Joel Mciver
(1 röst)
Inbunden Engelska, 2016-10-26
249
Köp
Spara som favorit
Skickas inom 5-8 vardagar.
Fri frakt inom Sverige för privatpersoner.
They are the band that created metal music . . . and they have defined it for more than four decades. Black Sabbath's career spans eleven different line-ups and nineteen studio albums in addition to the twenty-eight solo albums of the original four members. The band began in 1968 as a blues rock band on the cover circuit of Birmingham, England. Clawing their way up from the postwar bombed-out suburbs of Birmingham, the four members - guitarist and main songwriter Tony Iommi, bassist and main lyricist Geezer Butler, singer Ozzy Osbourne, and drummer Bill Ward - would define a new genre of music and make themselves world famous. Joel McIver explores the complete history of Sabbath, from the precursor bands to the release of the holy trinity of heavy metal - "Black Sabbath" (the song) on Black Sabbath (the album) by Black Sabbath (the band) - to the present. With over 150 photos, a gatefold family tree tracing the development of the band, a complete discography, and a foreword by Machine Head frontman Robb Flynn, this is the must-have book for any Sabbath fan.
Visa hela texten

"The Complete History of Black Sabbath: What Evil Lurks may look like a coffee table book at first, with it's giant size and massive, incredible photos, but it is much more than that. This book is a beautifully written look at all facets of the bands past. Every album. Every lineup. Every high and every low. It feels almost voyeuristic looking in at such a detailed account of the bands history." * MetalAFPodcast * "What makes this a great thorough read is that it talks about the entire history of the band (also in pictures). Sabbath and Ozzy solo, to the Dio albums, the album Ian Gillan sang on - Born Again and Glenn Hughes - Seventh Star which was supposed to be an Iommi solo album, to the terribly overlooked, underappreciated Tony Martin years, to their reunion with Bill Ward in the late '90s, and current farewell tour minus Ward." * Bravewords.com * "It's a beautiful book - plenty of excellent and never-before-seen pics...Nothing quite says Christmas like Black Sabbath, so this book should be a welcome present under the tree for that metal fan in the family." * TheDay.com *

Joel McIver is the bestselling author of Justice for All: The Truth About Metallica, which has been translated into 9 languages, and several other books. He has written for Rolling Stone, The Guardian, Metal Hammer, Classic Rock, and he is the occasional guest on BBC. Classic Rock magazine has called him "by some distance Britain's most prolific hard rock/metal author." He wrote the official biography of the world's biggest death metal band, Cannibal Corpse and co-wrote Megadeath's bio from bass player David Ellefson. Robb Flynn is the founder, frontman, and guitarist of Bay AreaaEURO"based metal band Machine Head, which has toured the world since 1994 alongside the world's biggest bands. The winner of many awards for their music, Machine Head has sold over three million records and was nominated for a Grammy award in 2008.