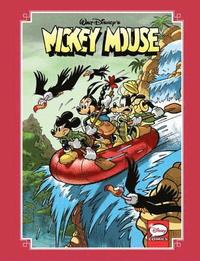 Andrea Castellan, who uses the pseudonym Casty, is an Italian comic artist and scriptwriter. He began writing scripts for Silver's 'Cattivik' comics in 1994, and started doing art on them in 1999. In that same year, he began working on Silver's other comic series, 'Lupo Alberto'. In 2007 he was involved in the 'Cattivik' television series for Mediaset. Casty started writing scripts for Topolino (Mickey Mouse) in 2003. He does art for the Italian 'Mickey Mouse' stories as well, in a style closer to classic artists like Scarpa and Gottfredson, instead of the more regular Cavazzano-influenced Italian style. Giorgio Cavazzano is an Italian artist that started his career at the age of 14 inking for Romano Scarpa producing stories for Disney with the characters Micke Mouse, Donald Duck, Scrooge McDuck, and others. He is known for combining the traditional appearance of Disney characters with realistic illustration of technological gadgets and machinery.