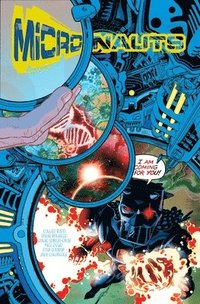 av Cullen Bunn
Häftad Engelska, 2017-01-03
219
Köp
Spara som favorit
THEY CAME FROM A DYING UNIVERSE! ACROYEAR, SPACE GLIDER, BIOTRON and their allies are back, on the run from the evil BARON KARZA, and blasting through a universe where magic and science vie for control! With resources dwindling, the long-lost TIME TRAVELERS may hold the key to salvation... but will it mean armageddon for our world? Collects issues #1-6.
Visa hela texten

Cullen Bunn is a comic books writer, novelist, and short story writer. He is best known for his work on comic books such as his Uncanny X-Men and various Deadpool miniseries for Marvel Comics, and his creator-owned series The Damned and The Sixth Gun for Oni Press, as well as his middle reader horror novel Crooked Hills, and his short story work collection Creeping Stones & Other Stories. As of early 2016, Bunn writes Uncanny X-Men, Drax, and Deadpool & The Mercs for Money for Marvel, Sinestro for DC, The Sixth Gun and Hellbreak for Oni Press, and Harrow County for Dark Horse.