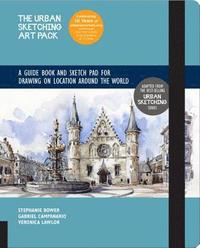 av Gabriel Campanario, Veronica Lawlor, Stephanie Bower
Inbunden Engelska, 2017-10-25
189
Köp
Spara som favorit
Skickas inom 3-6 vardagar.
Fri frakt inom Sverige för privatpersoner.
The Urban Sketching Art Pack is a portable package that includes an informational book and companion sketchpad filled with prompts for sketching on the go. The Urban Sketching Handbook series is now in a new format! This portable version of the art package includes a 112-page informational book and a 112-page companion sketchpad full of challenges to get you started on sketching urban environments. The Urban Sketching Art Pack tackles the specific challenges of making sketches on location. You'll find out the best ways to sketch rain or shine, quickly or slowly. Learn how to frame your scene, create a strong composition, and add detail and interest. Find out how to draw figures in motion, in proportion, and how to capture a person's features. As you advance through the lessons, you'll come to understand the anatomy of a good sketch by learning the secrets to how to draw in perspective. Best of all, you'll learn how to maximize your location drawing opportunities by developing your eye for sketch-worthy events and learning to immerse yourself in the sights and sounds of your fascinating city.
Visa hela texten

Gabriel Campanario is a staff artist at The Seattle Times and the founder of Urban Sketchers (urbansketchers.org), a nonprofit organization dedicated to fostering the art of on-location drawing. Campanario's newspaper column, Seattle Sketcher, was awarded first place for blog writing in "The Best of the West" journalism contest. The blog and weekly print column, which combine location sketches and written stories, have quickly become popular in the Seattle area, where Campanario has been featured in TV and radio appearances. A native Spaniard, Campanario moved to the US in 1998 and has lived near Seattle with his wife and two children since 2006. His journalism career spans two decades, working for newspapers in Barcelona, Lisbon, California, and Virginia. Campanario has a master's degree in journalism from the University of Navarra in Pamplona, Spain. Veronica Lawlor is an instructor at Parsons the New School for Design, Pratt Institute, and her own Dalvero Academy. She is an illustrator and the president of Studio 1482, the illustration collective that contributed illustrations to One Drawing A Day and One Watercolor A Day. Lawlor is also a correspondent with Urban Sketchers, and her work was featured in the Quarry book: The Art of Urban Sketching, as well as in the first two issues of the Urban Sketching Handbook series. Stephanie Bower worked as a licensed Architect in New York City before gravitating to professional architectural illustration and concept design. She taught the how-to's of architectural location sketching for over twenty-five years in New York City at Parsons and in Seattle at the University of Washington and Cornish College of the Arts. She has two online sketching classes at Bluprint.com, and she travels and teaches perspective and watercolor workshops internationally, including at six Urban Sketchers symposiums. People around the world follow her sketches online via Instagram @stephanieabower and Facebook, and she is an international blog correspondent for Urban Sketchers. Stephanie is a signature member of the Northwest Watercolor Society. She is the author of The Urban Sketching Handbook: Understanding Perspective (Quarry Books, 2016) and co-author of The Urban Sketching Art Pack (Quarry Books, 2017).