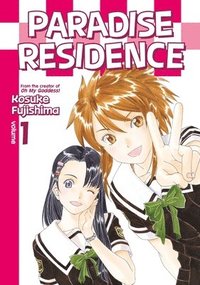 av Kosuke Fujishima
Häftad Engelska, 2016-03-15
149
Köp
Spara som favorit
Hatsune Takanashi is not the best of students - her grades are poor, she hates homework and the only thing that will rouse her from bed in the morning is the promise of pudding. But for all her drawbacks, Hatsune is full of energy and intends to make the best of her time at Ritsukan Boarding School, an all-girls high school atop a mountain that has been called a high-school girl's paradise.
Visa hela texten

Kosuke Fujishima is one of Japan - and America's - most popular manga artists. Fujishima is the creator of classics You're Under Arrest and Oh My Goddess!, both of which were published in English and adapted into lucrative anime franchises. He is also the character designer for the hit video game franchises "Sakura Wars" and "Tales of."