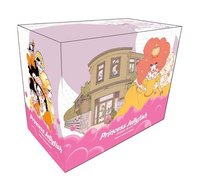 av Akiko Higashimura
Häftad Engelska, 2019-06-25
1379
Köp
Spara som favorit
Skickas inom 5-8 vardagar.
Fri frakt inom Sverige för privatpersoner.
Tsukimi Kurashita has a strange fascination with jellyfish. She's loved them from a young age and has carried that love with her to her new life in the big city of Tokyo. There, she resides in Amamizukan, a safe-haven for girl geeks who regularly gush over a range of things from trains to Japanese dolls. However, a chance meeting at a pet shop has Tsukimi crossing paths with one of the things that the residents of Amamizukan have been desperately trying to avoid a fashionable socialite!
Visa hela texten

"One of the best anime and manga for beginners. Enthusiasm - geeky and otherwise - is power in Princess Jellyfish. Enthusiasm saves the day and paves the road to the future." -Kotaku "Princess Jellyfish's ambition is simple: to tell a delightful story in a delightful way... It's a pretty deadly one-two punch." -Anime News Network "A highly entertaining story with sweet romance, lots of humor, and unique characters [with an] overall message of accepting yourself and others." -Geek Mom

One of Japan's most popular authors of manga for women, Akiko Higashimura has written more than a dozen series including My So-Called Author's Life and Mama Wa Temparist. After its adaptation into a popular anime and live-action film, Princess Jellyfish is her first work to be released in English. Her follow-up, Tokyo Tarareba Girls, is also out now in English in print and digital formats.