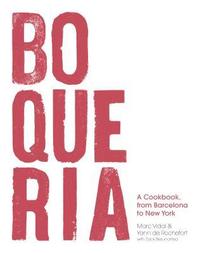 A Cookbook, from Barcelona to New York

av Marc Vidal, Yann De Rochefort, Genevieve Ko
Inbunden Engelska, 2018-07-12
249
Köp
Spara som favorit
Skickas inom 7-10 vardagar.
Fri frakt inom Sverige för privatpersoner.
Finns även som
Visa alla 1 format & utgåvor
"A sublime collection of traditional Spanish and Tapas recipes. Boqueria captures the soul of Spanish cuisine." --James Beard Award-winning chef and cookbook author Alfred Portale For over a decade New York City's famed Boqueria restaurants have been distilling the energy, atmosphere, and flavors of Barcelona, becoming a place where patrons share excellent wine and exquisite dishes. From traditional tapas like crispy patatas bravas and bacon-wrapped dates to classic favorites like garlicky sauteed shrimp, pork meatballs, and saffron-spiced seafood paella, Boqueria captures the very best of Spanish cuisine. For this sumptuous cookbook, restaurateur Yann de Rochefort and Executive Chef Marc Vidal tell the story of Boqueria, which has now spread to four New York City locations as well as to Washington, D.C. While the recipes-all deeply rooted in Barcelona's culinary culture-take center stage with phenomenal food photography, Boqueria also swings open the kitchen doors to reveal the bustling life of the restaurant, and offers exciting glimpses of the locales that inspire it: the bars, markets, and cervezerias of Barcelona. Transporting us to the busy, colorful stalls of legendary fresh market "La Boqueria," these portraits of the Spanish city are so vibrant that you can almost smell the Mediterranean's salt air. Boqueria's recipes are delectable variations on authentic Barcelona fare, but more than that; along with their origin stories, these recipes inspire a bit of the Boqueria experience-the cooking, the conversations, and the connections-in your own home.
Visa hela texten

A hefty, nicely photographed volume from Boqueria . . . It won't take long to call classic gazpacho, branzino speed-roasted on a bed of vegetables, clams showered with salsa verde, and watermelon sangria your own. * New York Times * Exciting and decadent. Vidal is a magician that gathers potato, egg and ham and churns out a humble masterpiece . . . approachable and impressive. * Eat Your Books * A sublime collection of traditional Spanish and Tapas recipes. Boqueria captures the soul of Spanish cuisine. * James Beard Award-winning chef and cookbook author Alfred Portale * What I love most about tapas and the food at Boqueria is that it's meant for sharing and enjoying together with friends and family. It's wonderful that Yann and Marc are now opening up their kitchens to home cooks and sharing these classic recipes with people to recreate and enjoy together at home. -- Dominique Ansel, Chef/Owner * Dominique Ansel Bakery & Kitchen * An extensive guide to the Spanish table that never intimidates and only invites. -- Ignacio Mattos, Chef/Owner * Estela, Cafe Altro Paradiso, and Flora Bar * Boqueria and Marc Vidal have managed to bring this soul to New York and Catalan cuisine to the world. -- Nandu Jubany, Michelin-Starred Chef * Can Jubany * Tapas--sharing many delicious plates--are more than just a meal, they are a way of life... This book will let you in on the fun. !Salud! -- Jose Andres, Chef/Owner * ThinkFoodGroup & minibar by Jose Andres * [Boqueria] has been bringing the taste of Barcelona to New York City for more than a decade . . . The easy-to-share plates always have the same end goal in mind: to inspire conversation and connection . . . With Boqueria, you can bring this same energy and togetherness to your home table with its thoughtful, fun, and, best of all, shareable recipes. * The Manual * Boqueria brings you Barcelona on a plate, thoughtfully written and beautifully photographed. * The Philadelphia Inquirer * The cookbook is a gateway to Spain . . . the recipes are all delicious--but more importantly, they're a means of recreating that communal spirit of Spain's tapas tradition. That's the spirit at the heart of Boqueria, and what Vidal and de Rochefort hope the cookbook captures for readers and home cooks. Whether at a bar in Barcelona, the high-seated tables of Boqueria, or your very own dinner table, ideally surrounded by loved ones on a warm and lazy summer night * Epoch Times * Impressive . . . [The book] begs to be opened and perused . . . Like a restaurant, a cookbook is a labor of love and, in the case of Boqueria, this team has seemingly gotten it all right. * WAG Magazine *

Marc Vidal's experience at his family's Barcelona restaurant inspired him to attend the Escola de Restauracion at age sixteen. He joined Boqueria in 2010 as Executive Chef. Yann de Rochefort, a former marketing executive, created Boqueria to pay homage to Barcelona's dining scene after having studied and lived in Spain. Zack Bezunartea started his restaurant career at age ten flipping burgers at his parents' snack bar in New Mexico. He is Director of Operations for all the Boqueria restaurants.