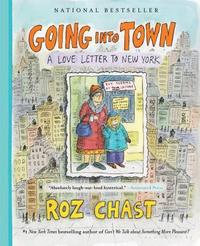 A Love Letter to New York

av Roz Chast
Häftad Engelska, 2019-06-13
129
Köp
Spara som favorit
Finns även som
Visa alla 2 format & utgåvor
The Washington Post "10 Best Graphic Novels of the Year" New York magazine "The Year's Most Giftable Coffee-Table Books" Newsday "Best Fall Books" The Verge "10 Best Comics of the Year" Oklahoman "Best Graphic Novels of the Year" Winner of the New York City Book Award From the #1 NYT bestselling author of Can't We Talk About Something More Pleasant?, Roz Chast, an "absolutely laugh-out-loud hysterical" (AP) illustrated ode/guide/thank-you to Manhattan. New Yorker cartoonist and NYT bestselling author Roz Chast, native Brooklynite-turned-suburban commuter deemed the quintessential New Yorker, has always been intensely alive to the glorious spectacle that is Manhattan--the daily clash of sidewalk racers and dawdlers, the fascinating range of dress codes, and the priceless, nutty outbursts of souls from all walks of life. For Chast, adjusting to life outside the city was surreal (you can own trees!? you have to drive!?), but she recognized that the reverse was true for her kids. On trips into town, they would marvel at the strange visual world of Manhattan--its blackened sidewalk gum wads, "those West Side Story-things" (fire escapes)--its crazily honeycombed systems and grids. Told through Chast's singularly zany, laugh-out-loud, touching, and true cartoons, Going into Town is part New York stories (the "overheard and overseen" of the island borough), part personal and practical guide to walking, talking, renting, and venting--an irresistible, one-of-a-kind love letter to the city.
Visa hela texten

A meandering map of Chast's hilarious mental approach to her beloved town, with all of its oddball shops, subterranean secrets and an abundance of visual stimulation. * The Washington Post * A whimsical, discursive paean to the city. * O, The Oprah Magazine * A wide-eyed love letter to New York. * New York Magazine * Chast's voice and vision make this a singular love letter to a singular city. -- starred review * Kirkus Reviews * The New Yorker magazine cartoonist has a style and sensibility like no one else's. Here she employs it in a graphic memoir of and tribute to New York City. Though she now lives in the Connecticut suburbs, Chast grew up in Brooklyn . . . As her own daughter prepared to move to the city for college, Chast compiled this volume that lets readers see New York through the artist's eyes. * Newsday, "Best Fall Books" * [Chast's] Big Apple cityscapes burst with jumbled buildings, oddities of every variety, and her trademark loose-edged-drawn people. * TimeOut NY * For New Yorkers, former New Yorkers and wannabe New Yorkers: Going into Town is absolutely laugh-out-loud hysterical. * Associated Press * Observations and advice on making one's way through the city's diversions are mixed with the quirky character that oozes from the metropolis's every concrete pore. It's all delivered with obvious and knowing affection and captured with a keenly observant pen. -- starred review * Publishers Weekly * Chast applies her appealingly shaggy drawing style and ever-so-slightly skewed worldview to New York's subways, museums, ethnic restaurants, and other attributes. * Booklist * For New Yorkers past and present, as well as those who admire the city from afar, this book is sure to delight. * Bookish, "The Must-Read Books of Fall 2017" * Love New York? So does Roz Chast, and we're the luckier for it . . . A handy reminder of what makes the city lovable, maddening and a little gross. * The Forward's "These Are the 23 Books You Need to Read this Summer" * Fans of Chast's bestselling memoir, Can't We Talk About Something More Pleasant?, will recognize and enjoy the unique blend of affection and sarcasm that Chast brings to her work while getting to know one of the world's most famous cities. * BookPage * Feels like a companion piece to E.B. White's seminal Here is New York. Her illustrated compendium is packed with off-kilter but still useful advice . . . * Conde Nast Traveler * [A] guide book full of wonder and optimism, a polar opposite of most current-affairs tomes about New York on the shelves today. Even when [Chast] remarks disparagingly about tourists or rodents or trash, it's done with the lightest of touches, graced with vibrating illustrations of herself . . . Curmudgeonly but not the least bit cynical. * The Bowery Boys * It's quirky and witty, her illustrations are as weird and poignant as always, and, most of all, it's just fun to see what grabs her attention. It will grab yours, too, and change the way you view New York. * Philadelphia Inquirer * The great New Yorker cartoonist salutes Manhattan. * Milwaukee Journal Sentinel, "75 books for holiday gift giving" * Whatever your experience of New York City, Chast will add to it in her inimitable laugh-out-loud way. There may be a better, funnier cartoonist working in the world today, but none that I know of. * Daily Herald, "Book Buzz: What to Read" * Roz Chast's breezy and winsome jaunt, Going into Town: A Love Letter to New York . . . is a deceptively rich rumination of New York as it exists today. * Jewish Book World * In nine illustrated chapters, Brooklyn native Chast celebrates Manhattan in all its glory. * Peach * The wonderful and inimitable Roz Chast introduces her old friend, New York City, in a beguiling way that will illuminate newcomers, prompt old-timers to nod in recognition, and inspire a whole new generation of siamese standpipe buffs. * Luc Sante *

Roz Chast grew up in Brooklyn. Her cartoons began appearing in the New Yorker in 1978, where she has since published more than one thousand. She wrote and illustrated the #1 NYT bestseller (100+ weeks) Can't We Talk about Something More Pleasant?, a National Book Critics Circle Award and Kirkus Prize winner and finalist for the National Book Award; What I Hate: From A to Z; and her cartoon collections The Party, After You Left and Theories of Everything. She was awarded the Harvey Award Hall of Fame Award.