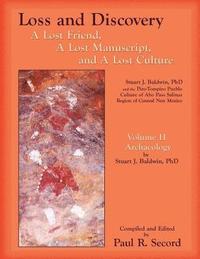 A Lost Friend, a Lost Manuscript, and a Lost Culture

av Paul R Secord
Häftad Engelska, 2019-01-23
309
Köp
Spara som favorit
Skickas inom 10-15 vardagar.
Fri frakt inom Sverige för privatpersoner.
This book in two volumes is the culmination of over twenty-five years of conjecture. Why didn?t archaeologist Stuart Baldwin, PhD (1946?1999) fully write up his research after a decade of work on the now extinct Piro-Tompiro culture in Central New Mexico? Why didn?t he return to the Southwest after 1988? What happened to the artifacts and notes from five years of excavation by a University of Calgary, Alberta, Canada, field school at Tenabo Pueblo, a large fourteenth to seventeenth century pueblo?

The answers to these questions, and a treasure trove of physical evidence and years of scholarship were discovered in 2016. This included detailed reports on the archaeology, ethnohistory and history of the Abo Pass region of New Mexico, along with complete site analyses of numerous surveys and limited excavations carried out in the region. Although completed nearly thirty years ago, Baldwin?s work remains the single most comprehensive and accurate presentation on the Native American Pueblo culture in Central New Mexico.

In these volumes we tell the story of rediscovering Baldwin?s life work and present all of a nearly 1,400 page unpublished manuscript that remained hidden for years in a research library?s archives. This is the second of these volumes and deals with archaeology and prehistory including rock art. Volume I is focused on history and ethnology.

As Baldwin wrote in the preface of his ?lost? manuscript: ?I believe (in) any attempt to pull together and present available information on (a)...cultur(e)..., even if it is ?only? the morality of saving a people from historical obscurity.?
Visa hela texten

Paul R. Secord was Stuart J. Baldwin's friend, fellow student and coworker. He is a 1972 graduate of the University of New Mexico with degrees in anthropology and geology. He had a professional career in Southern California as an environmental planning consultant specializing in historic and cultural resources. Since moving permanently to New Mexico in 2010, he has undertaken a number of history and archaeology projects and is the author of four books on New Mexico history: Albuquerque Deco and Pueblo (2012), Santa Fe's Historic Hotels (2013), Pecos (2014), Bandelier National Monument (2016), and The Maisel's Murals, 1936, Native American Art of the American Southwest (2018).

acknowledgements to the original manuscript by stuart j. baldwin

preface to the original manuscript by stuart j. baldwin

loss and discovery. a lost friend, a lost manuscript and a lost culture