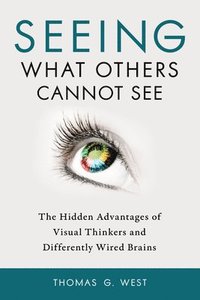 Seeing What Others Cannot See

The Hidden Advantages of Visual Thinkers and Differently Wired Brains

av Thomas G West
Häftad Engelska, 2017-07-11
189
Köp
Spara som favorit
For over 25 years, Thomas G. West has been a leading advocate for the importance of visual thinking, visual technologies and the creative potential of individuals with dyslexia and other learning differences. In this new book, he investigates how different kinds of brains and different ways of thinking can help to make discoveries and solve problems in innovative and unexpected ways. West focuses on what he has learned over the years from a group of extraordinarily creative, intelligent, and interesting people -- those with dyslexia, Asperger's syndrome, and other different ways of thinking, learning, and working. He shows that such people can provide important insights missed by experts as they also can prevent institutional "group think." Based on first-person accounts, West tells stories that include a dyslexic paleontologist in Montana, a special effects tech who worked for Pink Floyd and Kiss and who is now an advocate for those with Asperger's syndrome, a group of dyslexic master code breakers in a British electronic intelligence organization, a Colorado livestock handling expert who has become a forceful advocate for those with autism and a family of dyslexics and visual thinkers in Britain that includes four winners of the Nobel Prize in Physics. He also discusses persistent controversies and the unfolding science. This is an inspiring book that not only documents the achievements of people with various learning differences, but reveals their great potential -- especially in a new digital age where traditional clerical and academic skills are less and less important while an ability to think in pictures and to understand patterns using high-level computer information visualizations is rapidly increasing in value in the global economic marketplace.
Visa hela texten

""For twenty-five years Thomas G. West has been a leader in the movement to highlight the value and beauty of minds that see the world in nontypical ways. In Seeing What Others Cannot See, he presents his strongest case yet for the importance of recognizing, educating, and utilizing nonverbal strengths, and their special value in our contemporary world. Recommended for anyone interested in cognitive psychology, neuroscience, innovation and creativity, technology, and education." --Brock Eide, coauthor of The Dyslexic Advantage and The Mislabeled Child "People who think in pictures have contributed greatly to both scientific discovery and artistic expression. Thomas G. West carefully documents their abilities. Our education system needs to change from an emphasis on deficits to the development of a student's strengths." --Temple Grandin, author, Thinking in Pictures and The Autistic Brain "In this fascinating book, Thomas G. West revisits and interprets his earlier theories in the light of ongoing changes in society, highlighting the importance and awareness of positive aspects of dyslexia by contrast with the traditional deficit approach. Here he extends his thinking to include a novel evaluation of Asperger's, drawing links between distinctive visual thinkers in both groups in a series of compelling case studies. West argues most persuasively for greater emphasis on the power of visual literacy and the need for new tools to evaluate these strengths throughout life, to meet the challenging demands of our modern environment." --Angela Fawcett, PhD, former editor, Dyslexia, and coauthor, Dyslexia, Learning, and the Brain "West argues convincingly that dyslexics and related intellectuals seem to fail in elementary school learning while excelling at the broader level of graduate school. Many whose stories he recites were smashing successes in business. West urges that this is because of extra gifts in visual learning and thinking. He goes beyond praising dyslexics' hidden strengths in visual thinking and learning, their ability to see what others cannot see--he demands that we stop hiding the imaginative strengths of all children under their weaknesses in reading." --Donald Lindberg, MD, Director Emeritus, National Library of Medicine PRAISE FOR IN THE MIND'S EYE: "In the Mind's Eye brings out the special problems of people with dyslexia, but also their strengths, which are so often overlooked . . . . It stands alongside Howard Gardner's Frames of Mind as a testament to the range of human talent and possibility." --Oliver Sacks, M.D. "Thomas West brings to life the fascinating capacities and syndromes that arise from our visual-spatial imagination. His book proves beyond doubt that we are not all points on a single bell curve of intelligence." -- Howard Gardner "Every once in a while a book comes along that turns one's thinking upside down. In the Mind's Eye is just such a book." --Roeper Review PRAISE FOR THINKING LIKE EINSTEIN: "A persuasive, provocative argument for the societal benefits of visual thinking. Recommended for all computer science collections." --Library Journal "These are pathbreaking essays." --Los Angeles Times "West does do a good job weaving a biological connection through much of the collection, and he makes a compelling case for the growing importance of visualization as a powerful agent of change....The book is very readable and will attract a wide audience--anyone interested in better understanding the importance of visualization and some of its history....Highly Recommended." --Choice "An intriguing connection is made between such visually oriented folks as Einstein and learning disabilities such as dyslexia..." --Midwest Book Review's MBR Bookwatch

Thomas G. West is the author of the award-winning book In the Mind's Eye- Creative Visual Thinkers, Gifted Dyslexics and the Rise of Visual Technologies and the highly acclaimed Thinking like Einstein- Returning to Our Visual Roots with the Emerging Revolution in Computer Information Visualization. In the Mind's Eye was awarded a gold seal and selected as one of the "best of the best" for the year by the Association of College and Research Libraries of the American Library Association. The book has been translated into Japanese, Chinese, and Korean -- and West has provided presentations for scientific, medical, art, design, computer and business groups in the U.S. and nineteen foreign countries. West continues to lecture worldwide and has given presentations to the Dyslexia Association of Singapore, the Confederation of British Industry in London, the Netherlands Design Institute in Amsterdam, National Library of Medicine in Bethesda, Maryland, the Educational Testing Service in Princeton, the Aspen Institute in Colorado, Pixar Animation Studios in Emeryville, California, and the NASA Ames Research Center, along with many other institutions.