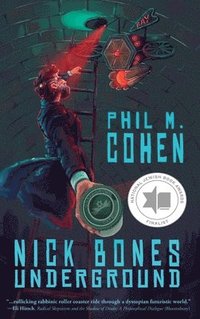 Professor Nick Friedman takes a wild ride through a dystopic and dangerous New York City searching for his old high school buddy Shmulie Shimmer. Shmulie is the inventor of Lerbs, the most popular designer drug ever. Friedman and his wisecracking AI computer, Maggie, encounter a world of odd and sometimes deadly characters above and below ground.

Told with sardonic humor, Nick Bones Underground offers an imaginative world and asks thought provoking questions: Is it possible to overcome the burden of past deeds? What is the nature of being human? Can an AI computer change gender and convert to Judaism? How did Nick Friedman become Nick Bones? Who is Robbie the Rabbi? Is it possible to get a good cup of coffee at the Outtaluck Café?
Visa hela texten

Eli Hirsch, Radical Skepticism and the Shadow of Doubt: A Philosophical Dialogue (Bloomsbury)

“come for the ai, stay for the mystery.”

“an aging jewish university professor of religion lying on a brooklyn hospital table after a heart attack, a chance meeting . . . [with] the father of a childhood friend gone bad; a homeless ex-graduate student living in the foyer of the narrator’s apartment building; a transgendered ai running a harvard-developed quantum computer program who imagines herself the avatar of marlene dietrich—what’s not to like in phil m. cohen’s first novel about nicholas friedman, a.k.a. nick bones, pi? jewish humor, talmudic reading, reflections on homelessness, artificial intelligence, philosophy of mind, ethics, and loneliness permeate this futuristic new york city landscape. plagued by memories of his jewish childhood companion who became a heartless gangster profiteering from a designer drug that puts people into a coma, the narrator pursues traces of the vanished friend into the hidden above and underground worlds of the city. sprouting scenic and verbal echoes of popular movies, books, and songs at every turn, the work becomes an inventive, zany, and thought-provoking subway ride, a hallucinogenic trip, and a philosophic meditation into the fictional and not-so-fictional universe of medicine, murder, and technological mayhem in contemporary american culture.”

“phil cohen’s novel is not only a pleasure to read, it is a thoughtful study in human relations. the book catches the reader’s attention from page one. cohen writes in a lively, crisp style; he creates fictional characters who teach so much about the ups and downs of real life.”

Rabbi Dr. Marc D. Angel, Director, Institute for Jewish Ideas and Ideals, author of The Crown of Solomon and Other Stories (Albion-Andalus Books, 2014)

“if a reform rabbi with a phd in jewish thought, a yen for hasidism, a lust for science fiction, and a yetser hora for mystery wrote a novel, Nick Bones Underground would be it. Read it and ponder.”

“Nick Bones Underground by Phil M. Cohen is a riveting science fiction mystery that I could no...

Phil M. Cohen's passion for storytelling emerges from his love of reading fiction and his commitment to the Jewish tradition. Through his education, he's learned how to create and interpret stories; how to grapple with philosophical questions; and how to write fiction. From his rabbinic work, he's gained insight into the world. From realms unknown and a bit scary, Phil M. Cohen continues to discover his creative imagination.

He is the author of nearly twenty published stories, dozens of articles and papers, and of the eBook Lucky 13. He blogs for The Times of Israel, as well as at his website, philmcohen.com, where he interviews authors and other literary figures. He writes flash fiction and short stories, as well as all the things clergy write. Nick Bones Underground is the first of a trilogy.