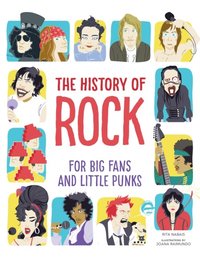 av Rita Nabais, Joana Raimundo
E-bok (PDF - DRM), Engelska, 2019-09-24
209
Ladda ned
Spara som favorit
Laddas ned direkt
Läs i vår app för iPhone, iPad och Android
Finns även som
Visa alla 2 format & utgåvor
The History of Rock: For Big Fans and Little Punks is a magical mystery tour through popular music history, featuring trailblazing acts from the 1950s to the present. Colorful, stylish illustrations bring to life artists like Jimi Hendrix, David Bowie, Joan Jett, and Madonna, plus bands such as The Beatles, The Clash, Beastie Boys, and Pearl Jam, all of whom have inspired countless boys and girls to become musicians over the past seventy years. Included throughout the book are hand-picked recommendations from every time period, forming an extended playlist of over 1,000 songs that pay tribute to the genre and its many sounds. Divided into thirty-five different chapters, including &quotePioneers Of Rock,&quote &quoteWomen At The Helm,&quote &quoteSmash It,&quote and &quoteHard As Rock,&quote this vivid collection also covers the artistic movements that influenced rock or were influenced by it, such as blues, jazz, soul, and hip hop. What began as a successful Kickstarter campaign is now a must-have for rockers of all ages!
Visa hela texten