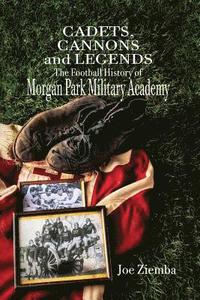 av Joe Ziemba
Häftad Engelska, 2018-11-07
229
Köp
Spara som favorit
Skickas inom 10-15 vardagar.
Fri frakt inom Sverige för privatpersoner.
When one considers traditional high school football powers in the United States, a tiny institution in Chicago is never mentioned. It has been decades since Morgan Park Military Academy last fielded a football team, yet the influence of its gridiron program cannot be disregarded. With a decorated football history dating back to 1893, the private school on Chicago?s south side completed nine undefeated seasons, sent four representatives to the College Football Hall of Fame, and often experienced difficulty scheduling games, due to the powerful teams it sent out on the field. Yet, it rarely enrolled more than 200 students in its high school curriculum!

Author Joe Ziemba details the fascinating history of the Academy football program from its beginnings in 1893 through its final season as Morgan Park Military Academy in 1958. Cadets, Cannons, and Legends: The Football History of Morgan Park Military Academy focuses on individual and team stories throughout the years, taking the reader back to a time when game travel was via horse and buggy, game reports were carried by the major Chicago newspapers, and football stars were treated as local celebrities.

Ziemba, whose father was the football coach at the Academy in the 1940s and 1950s, uncovered numerous ?forgotten? incidents from the past, including an episode in 1900 when the students were so pleased with a football victory that they accidently burned down a campus building! The reader will also meet former Academy players (and College Football Hall of Famers) like Jesse Harper, who became the legendary coach at Notre Dame; Wallace Wade, who led Alabama to three national championships; as well as Albert Benbrook, a two-time All-American at the University of Michigan. In addition, the steady hand of University of Chicago coach Amos Alonzo Stagg, who helped guide the Academy squad in its early years, is profiled.

Aside from these four Hall of Famers, the Academy football program also produced numerous collegiate head coaches at schools such as Illinois, Baylor, and Cincinnati, a Broadway playwright, an NFL official, and even a man who ascended to one of the highest political offices in the country. Along the way, Ziemba offers a glimpse at the history of the school itself (around since 1873) including student food strikes, financial challenges, one of the greatest unsolved crimes in Chicago gangland history, and the fact that over 800 graduates served in WWII, an astounding number for a prep school of this size.

More than just a history of one school, Cadets, Cannons, and Legends is must reading for any lover of football. It traces the very history of the game, detailing significant rules changes that saved the sport after years of catastrophic deaths on the field (including one at the Academy). Later, it details efforts to keep this private school extant during the Great Depression, including opening the campus doors to a profess...
Visa hela texten

"ziemba’s… scholarly rigor is indefatigable and remarkable…for readers interested in an astute history of the game’s inception, this is a worthy option. a remarkably well-researched history of a football team that should appeal to fans of the school or the game."

Joe Ziemba is the award-winning author of the book When Football Was Football: The Chicago Cardinals and the Birth of the NFL.

A life-long resident of the south side of Chicago, Joe first became interested in the history of football after discovering that his father was a draft choice for the Chicago Cardinals of the National Football League in the 1940s. He is now recognized nationally for his knowledge of the early days of the game and has been a resource for articles, photos, or reports in Sports Illustrated, the New York Times, the Chicago Sun-Times, the Chicago Tribune, the Daily Southtown, NBC Sunday Night Football, and many others. Joe has appeared on the WGN documentary "Football in Chicago," a Comcast Sports special on the Chicago Bears, as well as on radio stations such as WBBM and WSCR in Chicago. He has spoken on the history of football throughout the country at schools, libraries, service clubs, and conferences, and shares the humor and challenges that football pioneers faced in the early days of the game.

As a loyal, but frustrated, football fan, Joe is not allowed to remain in the same room with other human beings during telecasts of Notre Dame or Chicago Bears football games. He also is convinced that the seventy year wait since the last NFL title for the Chicago/Arizona Cardinals is a minor distraction that might end this century. Joe lives with his wife, Carol, in Frankfort, IL along with an ill-tempered, but charitable, Shih Tzu named Lucy. He can be reached at chicagocardinals1947@gmail.com or follow his Facebook page "Chicago Cardinals."