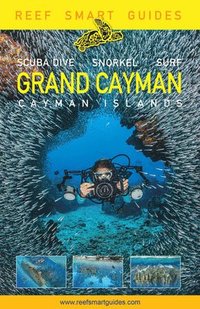 av Peter McDougall, Ian Popple, Otto Wagner
Häftad Engelska, 2020-10-27
339
Köp
Spara som favorit
Finns även som
Visa alla 1 format & utgåvor
The Definitive Guide to Scuba Diving and Snorkeling in The Grand Cayman Islands "The collection of Reef Smart Guides is a great resource for the touring diver. Incredible detailed 3D maps and up to date editorial content based on information from local dive experts, these cutting edge guidebooks are a must have for all scuba divers before they travel." Clearly Cayman Dive Resorts #1 New Release in Scuba Travel Guides, Caving & Spelunking, and Swimming For Lonely Planet fans comes a unique and essential scuba, snorkel, and surf travel guide. A great Caribbean travel book. The ultimate guide for beach and marine activities in the Grand Cayman Islands. The detailed descriptions and illustrations of beaches, coral reefs, shipwrecks, and other dive spots are ideal for divers, snorkelers and surfers. Make the most of your time on the Island and in the water. Detailed descriptions and map art. Reef Smart catalogues the beaches, surf spots, and dive and snorkel sites in the Cayman Islands. With the help of Reef Smart's unique 3D-mapping technology, learn all you need to know about the regions' top dive and snorkel sites. These maps provide useful information such as depths, currents, waves, suggested routes, potential hazards, unique structures, and species information. Don't go diving without it. This indispensable resource will help you plan and execute dives without a hitch. Pack this guidebook with the rest of your scuba gear. Guidebook provides: The best locations for diving, snorkeling, and surfing, and how to access them Detailed 3D maps, graphics, and information to help you plan your time in and out of the water Species guide to help you identify and understand the marine creatures in the Cayman Islands and its surrounding areas And much more! A unique and comprehensive SCUBA diving book. Also look for Reef Smart Guides Florida: Fort Lauderdale, Pompano Beach, and Deerfield Beach; Reef Smart Guides Barbados; and the best-selling Reef Smart Guides Bonaire.
Visa hela texten

Born and raised in Canada, Peter McDougall received his undergraduate and Master's degrees from McGill University. His focus on behavioral ecology and coral reef ecology led him to two field seasons at Bellairs Research Institute in Barbados, in 1999 and again in 2002. After graduating in 2003, Peter moved to the United States and began a career in science communication and writing, publishing in both peer-reviewed academic journals and the popular press. He has written on a variety of coastal ecosystem issues, including extensive work surrounding the science of ocean acidification. He is a PADI Rescue Diver with over 300 dives in 19 years of experience. Born and raised in the U.K., Ian Popple earned his undergraduate degree in oceanography from the University of Plymouth in 1994. He worked for five years at Bellairs Research Institute in Barbados, supporting research projects across the region, before completing his Master's in marine biology at McGill University in 2004. He co-founded a marine biology education company, Beautiful Oceans, before founding Reef Smart in 2015 to raise awareness and encourage people to explore the underwater world. Ian has published in both the scientific and mainstream media, including National Geographic, Scuba Diver Magazine and the Globe and Mail. He is a PADI Dive Master with over 3,000 dives in 25 years of diving experience. Born and raised in Romania, Otto Wagner graduated from the University of Art and Design in Cluj, Romania in 1991. He moved to Canada in 1999 where he studied Film Animation at Concordia University in Montreal. In 2006, Otto turned to underwater cartography and pioneered new techniques in 3D visual mapping. He co-founded Art to Media and began mapping underwater habitats around the world. Throughout his 25-year career, Otto has received numerous awards and international recognition for his work, including the Prize of Excellence in Design from the Salon International du Design de Montreal. He has also illustrated seven books. Otto is a PADI Advanced Diver with over 500 dives in 15 years of diving experience.