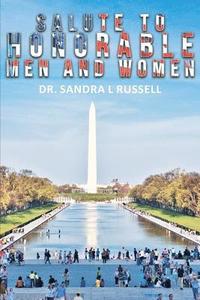 Salute to Honorable Men and Women

av Dr Sandra L Russell
Häftad Engelska, 2018-07-27
269
Köp
Spara som favorit
Skickas inom 10-15 vardagar.
Fri frakt inom Sverige för privatpersoner.
The OCS at Fort Knox Reunion held at the historic Sheraton Gunter Hotel, San Antonio, Texas, from August 18 to 21, 2016, was the inspiration for this book that hails the stories of Fort Knox OCS Candidates who lived to return from the Vietnam War and other postings in the Cold War. Their stories about survival and readjustment to life in their homeland inspired me. These stalwarts took to the stage and delivered personal sagas that left the audience spellbound. The writing muse nudged me. Stories were gathered from these honorable men. Exciting highlights unfold about their lives before, during, and after the Vietnam War. Why stop? Stories were sought from ordinary people, men and women, who served on battlefields; Gold Star moms who grieved the loss of military pilots; a spouse whose husband was missing for thirty-plus years; a mother whose son has never returned; World War II Italy warriors fighting alongside their brothers; the elite 10th Mountain Division Alpine Mountain Men; the US Coast Guard with daring rescues and routine lives that were anything but routine; and the average citizen, pilots facing horrific crash scenes, naval maneuvers offsetting war-meet these unsung heroes, the fabric of our United States of America.
Visa hela texten