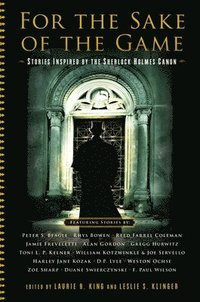 For the Sake of the Game

av Laurie R King, Leslie S Klinger
Häftad Engelska, 2020-07-08
169
Köp
Spara som favorit
Skickas inom 5-8 vardagar.
Fri frakt inom Sverige för privatpersoner.
Finns även som
Visa alla 1 format & utgåvor
In a sensational follow-up to Echoes of Sherlock Holmes and In the Company of Sherlock Holmes, a brand-new anthology of stories inspired by the Arthur Conan Doyle canon. For the Sake of the Game is the latest volume in the award-winning series from New York Times bestselling editors Laurie R. King and Leslie S. Klinger, with stories of Sherlock Holmes, Dr. Watson, and friends in a variety of eras and forms. King and Klinger have a simple formula: ask some of the world's greatest writers-regardless of genre-to be inspired by the stories of Arthur Conan Doyle. The results are surprising and joyous. Some tales are pastiches, featuring the recognizable figures of Holmes and Watson; others step away in time or place to describe characters and stories influenced by the Holmes world. Some of the authors spin whimsical tales of fancy; others tell hard-core thrillers or puzzling mysteries. One beloved author writes a song; two others craft a melancholy graphic tale of insectoid analysis. This is not a volume for readers who crave a steady diet of stories about Holmes and Watson on Baker Street. Rather, it is for the generations of readers who were themselves inspired by the classic tales, and who are prepared to let their imaginations roam freely. Featuring Stories by: Peter S. Beagle, Rhys Bowen, Reed Farrel Coleman, Jamie Freveletti, Alan Gordon, Gregg Hurwitz, Toni L. P. Kelner, William Kotzwinkle and Joe Servello, Harley Jane Kozak, D. P. Lyle, Weston Ochse, Zoe Sharp, Duane Swierczynski, and F. Paul Wilson.
Visa hela texten

An amazing array of stories. This collection is a must for Sherlock Holmes devotees this holiday season. Entertaining. This volume contains something for every fan of the Baker Street sleuth. King and Klinger have commissioned 14 new stories that make up their wildest, weirdest crop yet. Laurie R. King and Leslie Klinger continue to breathe new life into Sherlockian tales. Many of the stories are fascinating in their inventiveness. There's plenty of mystery, of course, but there are also elements of fantasy and sci-fi, as well as a comic strip with an insectoid Holmes.

Laurie R. King is the New York Times bestselling author of numerous books, including the Mary Russell-Sherlock Holmes stories. She has won or been nominated for a multitude of prizes, has been chosen as the guest of honor at several crime conventions, and is probably the only writer to have both an Edgar Award and an honorary doctorate in theology. She was inducted into the Baker Street Irregulars in 2010. Leslie S. Klinger is one of the world's foremost authorities on Sherlock Holmes. He is the editor of the three-volume The New Annotated Sherlock Holmes. The first two volumes, The Complete Short Stories, won the Edgar for "Best Critical/Biographical" work. He is also the editor of the hugely successful The New Annotated H. P. Lovecraft. Klinger is a member of the Baker Street Irregulars and lives in Malibu, California.