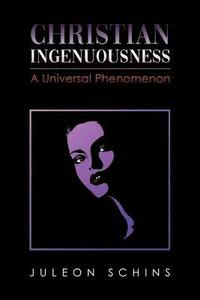 av N I C C O L O
Häftad Engelska, 2019-05-16
119
Köp
Spara som favorit
Skickas inom 10-15 vardagar.
Fri frakt inom Sverige över 159 kr för privatpersoner.
The book contains four chapters treating ingenuousness on an individual, professional, institutional, and collective level. The latter is also known as misguided patriotism. All these levels have in common that the involved (small minority) people do not at all understand why the outsiders (large majority) consider their views as ingenuous (in the sense of naive). As far as misguided patriotism is concerned: do you know any non-French who thinks of Napoleon as a hero with some kind of international legacy? Any non-Russian who considers Stalin, Lenin and Marx as noble Founding Fathers of Bolshevism? Any non-American who approves of American foreign policy? Any non- Brit who believes the government-commissioned note by Lady Justice Carol Hallett?s committee, claiming that three Islamists from Pakistan and one from Jamaica were responsible for what in reality was an openly declared Mossad attack? Any non-Israeli who finds it obvious that the Mossad freely operates in all European, American, Middle-Eastern, African, and former USSR countries, while the first picture of a non-Israeli secret agent wandering about in Israel still has to be taken? What is evident in the eyes of one person, is ridiculous in the eyes of 90% of the world population. Exactly the same occurs on the professional level: a chemist will tell you that, in the end, everything boils down to chemistry; a physicist, to physics; a lawyer, to law; a psychologist, to psychology. The only sure thing is that all these scientists are as confused as a stampede of buffaloes. This book is written for people who conclude, after reading this summary: ?nothing new under the sun?. Why for them? Because all examples, and a quite elaborate appendix on the human spirit, contain a little bee sting that will affect their thoughts about the ?practical fact? that everybody?s ideas are doomed to be Einstein relative (say, on the speed of light), culture-dependent, climate-dependent, social-class-dependent, income dependent, creed-dependent, moon-tide dependent, and hemisphere-dependent.
Visa hela texten

The author spent 20 years of his life as a researcher and university professor in the traditional scientific disciplines: physics, chemistry, mathematics, and biology. He specialized in the behavior of electrons in optically excited nanocrystals in solution. The most famous name in the field of reactive nanoparticles is that of Steven Jones, who reconstructed the nature of the explosives stalled in the twin towers: they were composed of two layers of atomic aluminum nanocrystals and iron oxide nanocrystals, coated on some flexible substrate. Whereas Steven Jones studied the New York dust (remainders of the twin towers) with all possible physical and chemical techniques, the author specialized on a single technique (femtosecond time-resolved optic-pump teraherz-probe spectroscopy) and applied it to non-explosive crystals of different shapes (spheres, cubes, foils), structures (pure, layered, mixed), and chemical composition (like PbS and CdSe). He used mathematics and quantum mechanics to explain his measured results. Intrigued by the sequel of the 1996 Sokal hoax, in 2015 the author decided to change his research, and has since then published four books on historic and sociologic themes (though not in the spirit of Sokal).