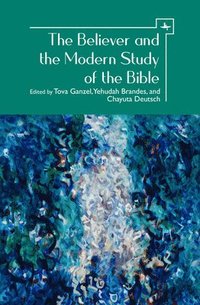 The Believer and the Modern Study of the Bible

av Tova Ganzel, Yehudah Brandes, Chayuta Deutsch
Häftad Engelska, 2019-12-12
489
Köp
Spara som favorit
Finns även som
Visa alla 2 format & utgåvor
The essays in this volume address the conundrum of how Jewish believers in the divine character of the Sinaitic revelation confront the essential questions raised by academic biblical studies. The first part is an anthology of rabbinic sources, from the medieval period to the present, treating questions that reflect a critical awareness of the Bible. The second part is a series of twenty-one essays by contemporary rabbis and scholars on how they combine their religious beliefs with their critical approach to the Bible.
Visa hela texten

"For observant Judaism to survive biblical criticism's heavy artillery it will have to further articulate the meaning of its faith claims. This will allow it to remain faithful to its traditions while maintaining a mature dialogue with contemporary modes of thought. ... The authors' sophisticated theological discourse inspires those who care about this tension to guide that debate towards the theological arena and away from the Beit Midrash. That is the arena in which orthodox creativity is most possible. The book convincingly demonstrates that retooling our theological formulations will allow orthodoxy to see these modernizing trends as complementary, not adversarial." -Rabbi Ysoscher Katz, Marginalia "The Believer and the Modern Study of the Bible is an important and accessible collection of articles. For the traditional Orthodox Jew, curious about the 'modern Study of the Bible,' this is a highly recommended first work. The book also provides fascinating insights into areas of religious culture and sociology-demonstrating the varied intellectual scaffolding being constructed to bridge two disciplines that are often at odds." -David Tesler, AJL Reviews

Tova Ganzel is the Director of the Midrasha at Bar-Ilan University and one the first trained women's halakhic advisors (Yoatzot Halacha). She received her PhD from Bar-Ilan's Department of Bible Studies, and is a renowned figure in the world of women's Jewish learning. She is the recipient of numerous prestigious academic awards and grants, and is a published author.

Introduction Preface to the English Translation Acknowledgments Annotated Anthology-"Wisdom and Knowledge Will be Given to You" Yoshi Fargeon Articles General Overview A Personal Perspective on Biblical History, the Authorship of the Torah, and Belief in its Divine Origin Shawn Zelig Aster The Sages as Bible Critics Yehuda Brandes The Tanakh as History Marc Zvi Brettler Kabbalah as a Shield against the "Scourge" of Biblical Criticism: A Comparative Analysis of the Torah Commentaries of Elia Benamozegh and Mordecai Breuer Adiel Cohen Orthodoxy and the Challenge of Biblical Criticism: Some Reflections on the Importance of Asking the Right Question Tamar Ross Ask the Rabbi: "Biblical Criticism is Destroying my Religious Faith!" Yuval Cherlow The Theophany at Sinai and the Passages of Revelation "I Shall Fear God Alone and Not Show Favor in Torah": A Conceptual Foundation for Wrestling with Biblical Scholarship David Bigman Revelation and Religious Authority in the Sinai Traditions Benjamin Sommer The Torah Speaks to People Chezi Cohen The Revelation Narratives: Analyses and Theological Reflections on Exodus, Deuteronomy, and Classical Midrash Avraham Shammah The Ethical Challenge The Binding of Isaac and Historical Contextuality Chayuta Deutsch Manasseh, King of Judah, in Early rabbinic Literature: An Erudite, Unfettered, and Creative Biblical Critic Hananel Mack Justification, Denial, and "Terraforming": Three Theological-Exegetical Models Amit Kula The Bible in Historical Context The Names of God and the Dating of the Biblical Corpus Yoel Elitzur Discrepancies between Laws in the Torah Joshua Berman Between the Prophet and his Prophecy: Ezekiel's Visionary Temple in its Historical Context Tova Ganzel The Torah of Moses and the Laws of the Nations: A Study in the Teachings of Rabbi Tzadok Ha-Kohen of Lublin Avia Hacohen Illuminating Inscriptions Yaakov Medan Archaeology and the Bible Haggai Misgav The Book of Daniel and the Twenty-First-Century Religious Bible Student Rivka Raviv