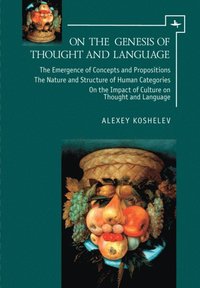 On the Genesis of Thought and Language (e-bok)

av Alexey Koshelev
E-bok (PDF - DRM), Engelska, 2020-04-07
2059
Ladda ned
Spara som favorit
Laddas ned direkt
Läs i vår app för iPhone, iPad och Android
Finns även som
Visa alla 2 format & utgåvor
In On the Genesis of Thought and Language, linguist Alexey Koshelev explores fundamental questions of how human concepts arise in a child, why concepts appear in a child before words, the genesis of language, and why there are so many languages. Chapter One introduces the fundamental dichotomy &quotevisual (exogenous) vs. functional (endogenous)&quote cognitive units; these units are used to give non-verbal definitions of mental representations of various objects, actions, and situations. In particular, definitions of such concepts as GLASS, CHAIR, BANANA, TREE, LAKE, RUN, and some others are given. Chapter Two discusses how children form concepts, hierarchical relationships, and propositions (conceptual 'utterances'). It is shown that the initial units of the child's representation of the world are pre-conceptual cognitive units-mental representations of whole situations. In the course of two consecutive cycles in the child's cognitive development, these units transform into (a) primary notions-object and motor concepts, and (b) binary role relationships. Together, they constitute the elementary language of thought which, in the process of thinking, is used to build conceptual structures-propositions. It is further demonstrated that, immediately after the formation of thought, the child begins to develop his native language in which concrete and motor concepts become initial meanings of nouns and verbs, while propositions become the meanings of the child's expressions. The chapter concludes with a contrastive analysis of the proposed approach and Aristotle's and Chomsky's views on thought and language. Chapter Three analyzes how a community's culture affects its language. It is demonstrated that the progress of a community, the main constituent of the civilizational component of its culture, enhances the development of the content component of language by extending the range of its lexical and grammatical meanings. In the context of this analysis, Daniel Everett's (2008) hypothesis that culture affects language structure is discussed. In the subsequent sections, models of the development of human and social activity are offered. These models comprise three components: Activity (main component), Thought, and Language (auxiliary components that ensure the successful realization of activities). The models are illustrated with examples of some concrete societies.
Visa hela texten