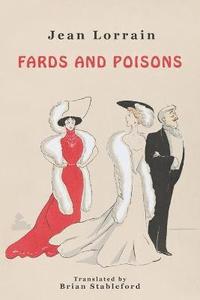 av Jean Lorrain
Häftad Engelska, 2019-10-22
239
Köp
Spara som favorit
Skickas inom 10-15 vardagar.
Fri frakt inom Sverige för privatpersoner.
Fards and Poisons, originally published in 1903 and here made available for the first time in English in a translation by Brian Stableford, is one of the more eccentric works of the ever-eccentric Jean Lorrain. Defying the standard narrative expectations of short stories, the items in this volume might be seen as a series of gossipy character sketches, of actresses and mystics, gigolos and dowagers, of an entire rogues gallery of fin de siècle types, which help explain how the author gained a reputation for corrupting public morals by literary means. Resembling fragments excised from a kind of endless series of conversations, the result is a strange literary collage that is perhaps the most quintessential of Lorrain?s works: the slice of his life that pins his own literary persona most precisely, like a lepidopterist?s long pin.

Included in the current volume, and for the first time republished since its initial appearance in Le Journal, is also the short story ?Victim?, for which Lorrain was disastrously sued, and convicted of, libel, the court imposing a massive punitive fine on the author and sentencing him to two months imprisonment, though the rulings were later overturned.
Visa hela texten