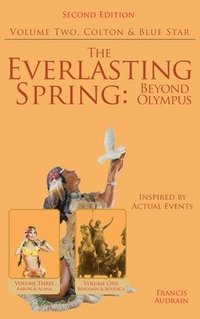 Beyond Olympus: Colton and Blue Star

When he was young and foolish; nave and swaggering with false bravado, the old man frolicked in the good life, and took it for granted...until a cold Christmas Eve when a lovely young woman broke his heart and changed his mind. His soul was frozen, in the absence of hope, as the tragic death of romance brought darkness, with agony and despair. But the trajectory of his life was soon altered, blessed by the light from a star so bright, he was inspired by the vision, and started to write.

He walked with his characters, the brave and bold, remembered by historians, the new and some old. He miraculously survived, four-score in events, with no worries...and a few sad regrets. His life was replete with trials and tribulations known only to those who dream, daring defeat; but find peace in their passion for truth everlasting.

Once called a hero, he perished the thought. The old man knew better souls, those who risked all for true-love and blind justice between the dark-nights of their souls, and their time in the light. They were immortals, seeking knowledge with facts; and their odyssey touched all, as they followed the sun, moon and stars--like the old man was doing when he met Benjamin and Boudica; Colton and Blue Star, and two others too, then chronicled their journeys in a corps of discovery: to find spiritual treasure...the most precious of all.
Visa hela texten