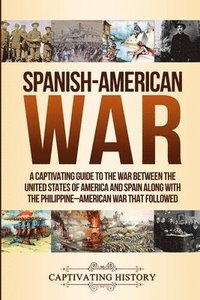 Two captivating manuscripts in one book:

The Spanish-American War really only lasted about ten weeks (the buildup and decision to go to war took longer than the war itself), but a peace treaty was not signed until December of 1898.

This was an event that was the tipping point for the end of the Spanish Empire and the rise of the US as a formidable player on the world stage. Not all Americans were happy with the change, with famous Americans like Mark Twain speaking out about the US occupation of the lands that it was meant to save. This breach was seen as being as antithetical to American ideals as bowing to the English crown would have been seen during the American Revolution. Still, the isolationist's view of the country was no longer popular, and more Americans wished to play a larger part in the world. The ideology of the country was not entirely different than it had been, but it was moving more toward the superpower it eventually became by the end of World War II. America had finally taken strides to match the might and power of the other Western countries, and it was increasingly more difficult to ignore the events around the world once they had lands to protect so far from the mainland.

Some of the topics covered in part 1 of this book include:

Some of the topics covered in part 2 of this book include:

A Captivating Guide to the Armed Conflict Between the United States of America and Spain That Took Place after the U.S. Intervened in the Cuban War of Independence

Chapter 2 – America – A Country Itching to Break out of Isolationism

A Handful of Wars

Recovery from a Civil War

New Ground for Both Spain and the US

José Martí and His Work to Build Anger Against Spain

Chapter 5 – Remember the Maine! – An Excuse for War

The Explosion of the USS Maine

The Teller Amendment and the Start of the War

Looking Back at the Likely Cause of the Explosion

The First Battles – Halfway around the World

Roosevelt’s Role before the War

The Rough Riders – A Very Different Group of Fighters

The Mascots of the Rough Riders

Reception of the African American Soldiers in Cuba

Sympathy of a Different Type

Chapter 9 – The Major Battles of the War in Cuba

The Battle of Las Guasimas

Chapter 10 – The Price of Peace

The Treaty of Paris

The Founding of the Anti-Imperialist League

Chapter 13 – The Tense Relationship between Cuba and the US

Chapter 14 – Half-Way around the World – The Philippine-American Relationship

A Phased Approach to Independence

Chapter 2 – The Waning Power of Spain