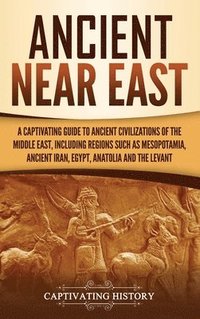 A Captivating Guide to Ancient Civilizations of the Middle East, Including Regions Such as Mesopotamia, Ancient Iran, Egypt, Anatolia, and the Levant

Where did the first signs of civilization appear in the ancient world? When did people start to transition from the nomadic life of hunters and gatherers to living in the first urbanized settlements? Who was the first emperor in history? Which empire was the strongest and mightiest, and for how long? Where did the title "King of the Universe" come from, and who was the "True King?" All these answers are hidden in the ancient history of the Fertile Crescent, and now, they are unveiled to you in our comprehensive and captivating guide to the ancient civilizations of the Near East.

Take a journey back in time and meet the first emperor and the mysterious legend that surrounds his origins. Find out who was the first pharaoh to unite the kingdom of Egypt, and discover the time when a woman ruled ancient Mesopotamia. You will also find out about the first people to inhabit the Levant and Anatolia, as well as how Persia lost their hegemony in the Levant. Join us as we discover the power of agriculture, trading, writing, and commerce, to the rise and fall of the first major empires in the world.

In Ancient Near East: A Captivating Guide to Ancient Civilizations of the Middle East, Including Regions Such as Mesopotamia, Ancient Iran, Egypt, Anatolia, and the Levant, you will discover topics such as

So if you want to learn more about the ancient Near East, scroll up and click the "add to cart" button!
Visa hela texten

chapter 1 - mesopotamia: the birth of the first civilization

sargon: the emperor among kings

the rise of an empire and the battling cities of sumer

culture, government, and military of the akkadian empire

chapter 2 -egypt: the unification of upper and lower egypt and the birth of the pharaohs

narmer: the founder of the first dynasty and the pharaoh of a united egypt

the rise and fall of the first dynasty in egypt

chapter 3 - ancient iran: from early urban settlements to the rise of the elamites

the three ruling dynasties of the old elamite period

culture, government, and military of elam

chapter 4 - anatolia: the bridge between asia and europe and the rise of the hittite old kingdom

the rise of the hittites in ancient anatolia

chapter 5 - the levant: the kingdom of ebla and the cultures of the ancient levant

the rise and fall of ebla and other ancient syrian kingdoms

culture, military, and government of ebla

the third dynasty of ur

the rise of babylon and the first amorite dynasty

culture, government, and military of the assyrian empire

chapter 7 - the old and new kingdom of egypt: dynastic egypt and the rise of power in the banks of nile

the rise of the eighteenth dynasty and the new kingdom of egypt: the egyptian empire

monotheism in egypt with pharaoh akhenaten and queen nefertiti

the rule of tutankhamun and the end of amarna

the peak and end of the new kingdom - the warrior kings

culture, government, and military of egypt

the legacy of tudhaliya i: the new kingdom and the rise of the hittite empire

culture, military, and government of the hittite kingdom

chapter 9 -beyond the wars and thrones: the everyday life of common people in the ancient near east

everyday life in the hittite kingdom

chapter 10 - the birth of religions in the ancient near east: the cradle of civilization and the gods

religions in the levant

chapter 11 - politics and international relations in the fertile crescent