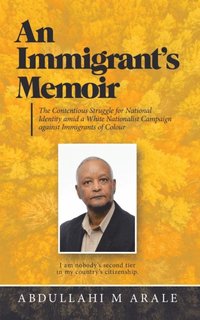 av Abdullahi M Arale
E-bok (EPUB - DRM), Engelska, 2021-06-07
59
Ladda ned
Spara som favorit
Laddas ned direkt
Läs i vår app för iPhone, iPad och Android
The book is a nonfiction, storytelling memoir, narrated by the author himself from his personal immigration dilemmas in terms of early migration experiences to Canada, his ensuing struggles for establishing legal status and equally striving to fit into the Canadian society, through the process of integration. Through this chronicle, the book emphasizes the need for social justice that is equality before the law, equal opportunity for employment and equal justice and treatment for all Canadians irrespective of their skin color, national origin, faith and sexual orientation. It strives in this historical and experiential narrative to expose the undeclared racial and religious battles percolating in Canada since its inception, manifesting themselves in racist and discriminatory public displays often organized and carried out by a racist, white nationalist section of society, against immigrants about which no one, specifically, 'white Canadians' do not want to talk about, never mind taking a clear position against it. The book strives as well to shed light on &quotethe European superiority myth&quote (Hughes, 08, 2015) and [ Why Europe is the superior civilization; why not China&quote ( Landes, spring 2006)]&quote which both authors ascribe the principle causes of bondage, death, disease, crimes against humanity to this very Eurocentric mindset. Equally, as reported by Andrea Smith the author of &quoteIndigeneity, Settler Colonialism, White Supremacy is attributable to the genocide against Indigenous Peoples of the African, Australian and North American continents (Smith, A). The author, as a new Canadian, experiences prejudice and stereotype in a university classroom. He envisioned that white supremacists must not use university venues as a platform for their bigoted views. Hence, he decides to write a book addressing the myth of euro superiority. In this work, the author disposes cruelties used by north American white settlers to enslave black people, massacre, humiliate and dispossess Indigenous peoples 'lands. Notwithstanding of its defeat in WWWII, ,Euro superiority thrives to this day, causing social disunity here in North America and elsewhere. Five-point proposals are put forward to empower Canadian institutions as well as citizens against white supremacy ideology.
Visa hela texten