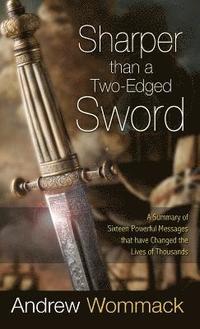 Sharper Than a Two-Edged Sword

Sharper than a Two-Edged Sword is a compilation and summary of the sixteen most requested and important revelations God has given me. Some have even called these the Cliff Note versions of my messages. Each chapter addresses a specific topic in an abbreviated form, making it much easier to see how these truths are related and dependent upon one another.

For example, if you understand the message of grace but have not balanced it with faith, neither of them will work effectively in your life. I encourage you, take the time to read the book through completely to get an overview and then go back and study the suggested materials listed at the end of each chapter.
Visa hela texten

For over four decades Andrew Wommack has traveled America and the world teaching the truth of the gospel. His profound revelation of the Word of God is taught with clarity and simplicity, emphasizing God's unconditional love and the balance between grace and faith. He reaches millions of people through the daily Gospel Truth radio and television programs, broadcast both domestically and internationally. Gospel Truth television broadcast can be seen on INSP, DayStar, The Church Channel, Cornerstone, Guardian, God TV, and over 80 local US channels. Gospel Truth radio broadcast is heard on more than 60 stations nationwide. Andrew Wommack founded Charis Bible College in 1994 and has since established CBC extension colleges in other major cities of America and around the world.