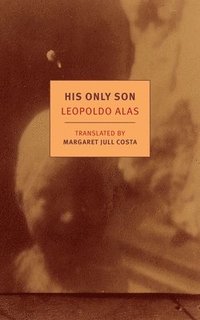 av Leopoldo Alas, Margaret Jull Costa
Häftad Engelska, 2016-10-04
189
Köp
Spara som favorit
Specialorder (osäker tillgång). Skickas inom 11-20 vardagar.
Gratis frakt inom Sverige över 159 kr för privatpersoner.
Finns även som
Visa alla 1 format & utgåvor
The unlikely hero of His Only Son, Bonifacio Reyes, is a romantic and a flautist by vocation-and a failed clerk and kept husband by necessity-who dreams of a novelesque life. Tied to his shrill and sickly wife by her purse strings, he enters timidly into a love affair with Serafina, a seductive second-rate opera singer, encouraged by her manager who mistakes Bonifacio for a potential patron. Meanwhile, Bonifacio's wife experiences a parallel awakening and in the midst of a long-barren marriage, surprises them both with a son-but is it Bonifacio's? In the accompanying novella, Doña Berta, the heroine of the title, an aged, poor, but well-born woman, forfeits her beloved estate in search of a portrait that may be all that remains of the secret love of her life.

While largely unknown outside of Spain, Leopoldo Alas was one of the most celebrated writers of criticism in nineteenth-century Spain and employed his satirical talents to powerful and humorous effect in fiction. His Only Son was Alas's second and final novel, full of characteristic humor, naturalistic detail, descriptive beauty, and moral complexity. His frail and pitiful characters-irrational, emotional actors drawn inexorably toward their foolish fates-are yet multidimensional individuals, often conscious of their own weaknesses and stymied by their very yearnings to be more than the parts they find themselves playing.
Visa hela texten