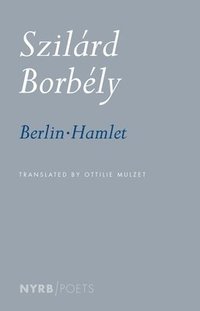 Before his tragic death, Szilárd Borbély had gained a name as one of Europe's most searching new poets. Berlin-Hamlet-one of his major works-evokes a stroll through the phantasmagoric shopping arcades described in Walter Benjamin's Arcades Project, but instead of the delirious image fragments of nineteenth-century European culture, we pass by disembodied scraps of written text, remnants as ghostly as their authors: primarily Franz Kafka but also Benjamin himself or the Hungarian poets Attila József or Erno Szép. Paraphrases and reworked quotations, drawing upon the vanished prewar legacy, particularly its German Jewish aspects, appear in sharp juxtaposition with images of post-1989 Berlin frantically rebuilding itself in the wake of German reunification.
Visa hela texten