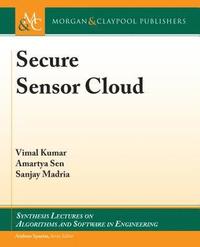 av Vimal Kumar, Amartya Sen, Sanjay Madria
Häftad Engelska, 2018-12-30
679
Köp
Spara som favorit
Skickas inom 5-8 vardagar.
Fri frakt inom Sverige för privatpersoner.
Finns även som
Visa alla 2 format & utgåvor
The sensor cloud is a new model of computing paradigm for Wireless Sensor Networks (WSNs), which facilitates resource sharing and provides a platform to integrate different sensor networks where multiple users can build their own sensing applications at the same time. It enables a multi-user on-demand sensory system, where computing, sensing, and wireless network resources are shared among applications. Therefore, it has inherent challenges for providing security and privacy across the sensor cloud infrastructure. With the integration of WSNs with different ownerships, and users running a variety of applications including their own code, there is a need for a risk assessment mechanism to estimate the likelihood and impact of attacks on the life of the network. The data being generated by the wireless sensors in a sensor cloud need to be protected against adversaries, which may be outsiders as well as insiders. Similarly, the code disseminated to the sensors within the sensor cloud needs to be protected against inside and outside adversaries. Moreover, since the wireless sensors cannot support complex and energy-intensive measures, the lightweight schemes for integrity, security, and privacy of the data have to be redesigned. The book starts with the motivation and architecture discussion of a sensor cloud. Due to the integration of multiple WSNs running user-owned applications and code, the possibility of attacks is more likely. Thus, next, we discuss a risk assessment mechanism to estimate the likelihood and impact of attacks on these WSNs in a sensor cloud using a framework that allows the security administrator to better understand the threats present and take necessary actions. Then, we discuss integrity and privacy preserving data aggregation in a sensor cloud as it becomes harder to protect data in this environment. Integrity of data can be compromised as it becomes easier for an attacker to inject false data in a sensor cloud, and due to hop by hop nature, privacy of data could be leaked as well. Next, the book discusses a fine-grained access control scheme which works on the secure aggregated data in a sensor cloud. This scheme uses Attribute Based Encryption (ABE) to achieve the objective. Furthermore, to securely and efficiently disseminate application code in sensor cloud, we present a secure code dissemination algorithm which first reduces the amount of code to be transmitted from the base station to the sensor nodes. It then uses Symmetric Proxy Re-encryption along with Bloom filters and Hash-based Message Authentication Code (HMACs) to protect the code against eavesdropping and false code injection attacks.
Visa hela texten

Vimal Kumar is a lecturer with the Computer Science Department of the Faculty of Computing and Mathematical Sciences at the University of Waikato in Hamilton, New Zealand. He received his Ph.D. from Missouri University of Science and Technology, USA, in 2013 and was previously Assistant Professor at the University of West Florida and software engineer for Computer Sciences Corporation. His research interests are broadly in the areas of wireless sensors, cloud computing, and security. He is particularly interested in the development of secure wireless sensor networks, sensor clouds, and the ""Internet of Things"" and is also looking into the security of wearable devices and other issues in secure cloud computing. Amartya Sen is an Assistant Professor in the Department of Computer Science and Engineering at Oakland University, Rochester, Michigan. He received his Ph.D. in Computer Science from Missouri University of Science and Technology, USA in May 2018. He has published in peer-reviewed journals such as IEEE Transaction on Services Computing and IEEE Cloud Computing. His research interests are in the broad areas of cybersecurity and risk assessment in Cloud computing, autonomous vehicles, and Internet of Things. Sanjay Madria is Curators' Distinguished professor in the Department of Computer Science at the Missouri University of Science and Technology (formerly, University of Missouri-Rolla, USA). He received his Ph.D. in Computer Science from Indian Institute of Technology, Delhi, India in 1995. He has published over 250 journal and conference papers in the areas of mobile and sensor computing, mobile data management, cloud, and cyber security. He won five IEEE best papers awards in conferences such as IEEE MDM 2011, IEEE MDM 2012, and IEEE SRDS 2015. He is a co-author of a book published by Springer in 2003 and co-author of a new book by Morgan & Claypool in 2018. He is an Associate Editor of Pervasive and Mobile Computing, Distributed and Parallel Databases, and Knowledge and Advanced Information System. He has served/serving in international conferences as a general co-chair, pc co-chair, and steering committee member (such as of IEEE MDM, IEEE SRDS), and presented tutorials in the areas of secure sensor cloud, mobile computing, cloud computing, big data, etc. NSF, NIST, ARL, ARO, AFRL, DOE, Boeing, and Hangsoft, among others, have funded his research projects. He has been awarded the JSPS (Japanese Society for Promotion of Science) visiting scientist fellowship in 2006 and the ASEE (American Society of Engineering Education) fellowship from 2008-2018. He was awarded the NRC Fellowship by National Academies in the year 2012 and 2018. He received faculty excellence research awards six times from his university for his research contributions. He is an ACM Distinguished Scientist and ACM Distinguished Speaker. He served as IEEE Distinguished Speaker and is an IEEE Senior Member as well as IEEE Golden Core Awardee.