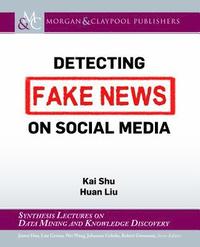 av Kai Shu, Huan Liu
Inbunden Engelska, 2019-08-30
879
Köp
Spara som favorit
Skickas inom 3-6 vardagar.
Fri frakt inom Sverige för privatpersoner.
Finns även som
Visa alla 1 format & utgåvor
In the past decade, social media has become increasingly popular for news consumption due to its easy access, fast dissemination, and low cost.However, social media also enables the wide propagation of "fake news," i.e., news with intentionally false information. Fake news on social media can have significant negative societal effects. Therefore, fake news detection on social media has recently become an emerging research area that is attracting tremendous attention. This book, from a data mining perspective, introduces the basic concepts and characteristics of fake news across disciplines, reviews representative fake news detection methods in a principled way, and illustrates challenging issues of fake news detection on social media. In particular, we discussed the value of news content and social context, and important extensions to handle early detection, weakly-supervised detection, and explainable detection. The concepts, algorithms, and methods described in this lecture can help harness the power of social media to build effective and intelligent fake news detection systems. This book is an accessible introduction to the study of detecting fake news on social media. It is an essential reading for students, researchers, and practitioners to understand, manage, and excel in this area. This book is supported by additional materials, including lecture slides, the complete set of figures, key references, datasets, tools used in this book, and the source code of representative algorithms.
Visa hela texten

Kai Shu is a Ph.D. student and research assistant at the Data Mining and Machine Learning (DMML) Lab at Arizona State University. He received his B.S./M.S. from Chongqing University in 2012 and 2015, respectively. His research interests include fake news detection, social computing, data mining, and machine learning. He was awarded ASU CIDSE Doctorial Fellowship 2015, the 1st place of SBP Disinformation Challenge 2018, University Graduate Fellowship, and various scholarships. He co-presented two tutorials in KDD 2019 and WSDM 2019, and has published innovative works in highly ranked journals and top conference proceedings such as ACM KDD, WSDM, WWW, CIKM, IEEE ICDM, IJCAI, AAAI, and MICCAI. He also worked as a research intern at Yahoo! Research and Microsoft Research in 2018 and 2019, respectively. Huan Liu is a professor of Computer Science and Engineering at Arizona State University. Before he joined ASU, he worked at Telecom Australia Research Labs and was on the faculty at the National University of Singapore. His research interests are in data mining, machine learning, social computing, and artificial intelligence, investigating interdisciplinary problems that arise in many real-world, data-intensive applications with high-dimensional data of disparate forms such as social media. He is a co-author of Social Media Mining: An Introduction (Cambridge University Press). He is a founding organizer of the International Conference Series on Social Computing, Behavioral-Cultural Modeling, and Prediction, Field Chief Editor of Frontiers in Big Data and its Specialty Chief Editor in Data Mining and Management. He is a Fellow of ACM, AAAI, AAAS, and IEEE. University of Illinois at Urbana-Champaign University of California Santa Cruz. Wei Wang is an associate professor in the Department of Computer Science and a member of the Carolina Center for Genomic Sciences at the University of North Carolina at Chapel Hill. She received a MS degree from the State University of New York at Binghamton in 1995 and a PhD degree in Computer Science from the University of California at Los Angeles in 1999. She was a research staff member at the IBM T. J. Watson Research Center between 1999 and 2002. Dr. Wang's research interests include data mining, bioinformatics, and databases. She has filed seven patents, and has published one monograph and more than one hundred research papers in international journals and major peer-reviewed conference proceedings. Dr. Wang received the IBM Invention Achievement Awards in 2000 and 2001. She was the recipient of a UNC Junior Faculty Development Award in 2003 and an NSF Faculty Early Career Development (CAREER) Award in 2005. She was named a Microsoft Research New Faculty Fellow in 2005. She was recently honored with the 2007 Phillip and Ruth Hettleman Prize for Artistic and Scholarly Achievement at UNC. Dr. Wang is an associate editor of the IEEE Transactions on Knowledge and Data Engineering and ACM Transactions on Knowledge Discovery in Data, and an editorial board member of the International Journal of Data Mining and Bioinformatics. She serves on the program committees of prestigious international conferences such as ACM SIGMOD, ACM SIGKDD, VLDB, ICDE, EDBT, ACM CIKM, IEEE ICDM, and SSDBM.