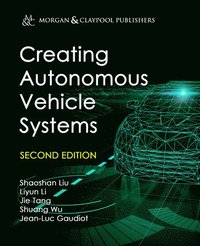 av Shaoshan Liu, Liyun Li, Jie Tang, Shuang Wu, Jean-Luc Gaudiot
Häftad Engelska, 2020-09-30
814
Köp
Spara som favorit
Skickas inom 7-10 vardagar.
Gratis frakt inom Sverige över 159 kr för privatpersoner.
Finns även som
Visa alla 7 format & utgåvor
This book is one of the first technical overviews of autonomous vehicles written for a general computing and engineering audience. The authors share their practical experiences designing autonomous vehicle systems. These systems are complex, consisting of three major subsystems: (1) algorithms for localization, perception, and planning and control; (2) client systems, such as the robotics operating system and hardware platform; and (3) the cloud platform, which includes data storage, simulation, high-definition (HD) mapping, and deep learning model training. The algorithm subsystem extracts meaningful information from sensor raw data to understand its environment and make decisions as to its future actions. The client subsystem integrates these algorithms to meet real-time and reliability requirements. The cloud platform provides offline computing and storage capabilities for autonomous vehicles. Using the cloud platform, new algorithms can be tested so as to update the HD map-in addition to training better recognition, tracking, and decision models.Since the first edition of this book was released, many universities have adopted it in their autonomous driving classes, and the authors received many helpful comments and feedback from readers. Based on this, the second edition was improved by extending and rewriting multiple chapters and adding two commercial test case studies. In addition, a new section entitled "Teaching and Learning from this Book" was added to help instructors better utilize this book in their classes. The second edition captures the latest advances in autonomous driving and that it also presents usable real-world case studies to help readers better understand how to utilize their lessons in commercial autonomous driving projects. This book should be useful to students, researchers, and practitioners alike. Whether you are an undergraduate or a graduate student interested in autonomous driving, you will find herein a comprehensive overview of the whole autonomous vehicle technology stack. If you are an autonomous driving practitioner, the many practical techniques introduced in this book will be of interest to you. Researchers will also find extensive references for an effective, deeper exploration of the various technologies.
Visa hela texten

Dr. Shaoshan Liu is the Founder and CEO of PerceptIn, an autonomous driving technology company. Since founding, PerceptIn has attracted over 12 million USD of funding of from top-notch venture capital firms, including Walden International, Matrix Partners, and Samsung Ventures. Before founding PerceptIn, Dr. Shaoshan Liu had over 10 years of experience at leading R&D institutes, including Baidu USA, LinkedIn, Microsoft, Microsoft Research, INRIA, Intel Research, and Broadcom. Dr. Shaoshan Liu received a Ph.D. in Computer Engineering from the University of California, Irvine. He has published over 60 high-quality research papers and holds over 150 U.S. international patents on robotics and autonomous driving and is also the lead author of the best-selling textbooks Creating Autonomous Vehicle Systems and Engineering Autonomous Vehicles and Robots. Dr. Shaoshan Liu is a senior member of IEEE, a distinguished speaker of the IEEE Computer Society, and a distinguished speaker of the ACM. Dr. Shaoshan Liu is also the founder of the IEEE Special Technical Community on Autonomous Driving Technologies. Dr. Liyun Li has more than 6 years of experience in autonomous driving software development. He is currently a principal engineer and manager at Xpeng Motors (NYSE: XPEV), where he leads the software development of Navigation Guided Pilot (NGP). Before joining Xpeng Motors, he served as a principal engineer at JD.com. He is one of the founding members of Baidu USA's autonomous driving team, where he has driven and led the effort of building core modules in Baidu's open-source autonomous driving system, including planning and prediction. Dr. Li has published two books in Autonomous Driving: Creating Autonomous Vehicle Systems (Morgan & Claypool Publishers) and The First Technology Book in Autonomous Driving (Publishing House of Electronics Industry (PHEI)). He is also the inventor of more than 20 international patents in autonomous driving. Dr. Li received his Ph.D. in Computer Science from New York University and Bachelor's degree in Electronic Engineering from Tsinghua University. Dr. Jie Tang is currently an associate professor in the School of Computer Science and Engineering of South China University of Technology, Guangzhou, China. Before joining SCUT, Dr. Tang was a postdoctoral researcher at the University of California, Riverside and Clarkson University from December 2013 to August 2015. She received a B.E. from the University of Defense Technology in 2006, and a Ph.D. from the Beijing Institute of Technology in 2012, both in Computer Science. From 2009-2011, she was a visiting researcher at the PArallel Systems and Computer Architecture Lab (PASCAL) at the University of California, Irvine, USA. Dr. Shuang Wu is currently a scientist at Yitu Technology. Previously he was a senior research scientist at Baidu's AI lab in Sunnyvale, CA and a senior architect at Baidu USDC. He earned his Ph.D. in Physics from University of Southern California, and was a postdoctoral researcher at UCLA. He has conducted research in computer and biological vision, applied machine learning in industry for computational advertisement, and speech recognition. He has published in conferences such as NIPS and ICML. Dr. Jean-Luc Gaudiot received the Diplome d'Ingenieur from ESIEE, Paris, France, in 1976 and M.S. and Ph.D. degrees in Computer Science from UCLA in 1977 and 1982, respectively. He is currently a professor in the Electrical Engineering and Computer Science Department at UC Irvine (UCI). Prior to joining UCI in 2002, he was Professor of Electrical Engineering at the University of Southern California since 1982. His research interests include multithreaded architectures, fault-tolerant multiprocessors, and implementation of reconfigurable architectures. He has published over 250 journal and conference papers. His research has been sponsored by NSF, DoE, and DARPA, as well as a number of industrial companies. He has served the communi