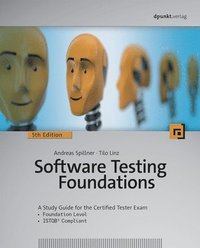 A Study Guide for the Certified Tester Exam

av Andreas Spillner, Tilo Linz
Häftad Engelska, 2021-10-28
459
Köp
Spara som favorit
Finns även som
Visa alla 2 format & utgåvor
Professional testing of software is an essential task that requires a profound knowledge of testing techniques. The International Software Testing Qualifications Board (ISTQB) has developed a universally accepted, international qualification scheme aimed at software and system testing professionals, and has created the Syllabi and Tests for the Certified Tester. Today, hundreds of thousands of people have taken the ISTQB certification exams. The authors of Software Testing Foundations, 5th Edition, are among the creators of the Certified Tester Syllabus and are currently active in the ISTQB. This thoroughly revised and updated fifth edition covers the Foundations Level (entry level) and teaches the most important methods of software testing. It is designed for self-study and provides the information necessary to pass the Certified Tester Foundations Level exam, as defined by the ISTQB. Also in this new edition, technical terms have been precisely stated according to the ISTQB glossary. Topics covered: Fundamentals of Testing Testing and the Software Lifecycle Static and Dynamic Testing Techniques Test Management Test Tools
Visa hela texten

Andreas Spillner is a professor of Computer Science in the Faculty of Electrical Engineering and Computer Science at the Hochschule Bremen (University of Applied Sciences), where he is responsible for software engineering, quality assurance, and programming. He was a founding member and is now an honorary member of the German Testing Board e.V., and he was founder and chair of the German Special Interest Group on Software Testing (SIGIST, Test, Analyse und Verifikation von Software) from 1990 to 2003. Prof. Spillner was appointed Fellow of the German Informatics Society (GI-Fellow) in 2007. Tilo Linz has worked in the software quality assurance and testing field for more than 20 years. He is a founder and chairman of imbus AG, one of the leading service and product providers in this sector. In addition to his work at imbus, Linz focuses on vocational education and training opportunities for test experts. He helped initiate the International Software Testing Qualifications Board (ISTQB) and served as its president from 2002 to 2005. In 2002 he also founded the German Testing Board e.V. (GBT), where he was chairman on a voluntary basis until 2013. He is a co-author of Software Testing Practice:Test Management and four editions of Software Testing Foundations, and is the author of Testing in Scrum (to be released in 2014). He is ranked among the most renowned experts in the field of software testing.