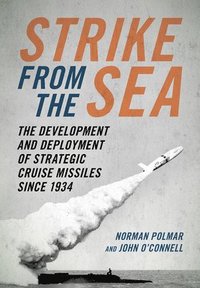 Strike from the Sea

The Development and Deployment of Strategic Cruise Missiles since 1934

av Norman Polmar, John O'Connell
Inbunden Engelska, 2020-09-30
399
Köp
Spara som favorit
Skickas inom 7-10 vardagar.
Gratis frakt inom Sverige över 159 kr för privatpersoner.
The cruise missile-also referred to as a guided missile-is a widely employed tactical and strategic weapon, capable of striking ground or ship targets with conventional or nuclear warheads. Before the development of ballistic missiles for attacking an enemy's homeland the U.S. and Soviet strategic arsenals had land-attack cruise missiles to deliver nuclear warheads. Subsequently, the U.S. and Soviet Navies as well as other fleets developed tactical anti-ship and anti-submarine cruise missiles. Much of this book addresses the U.S. Navy's Regulus missile program-the world's first submarine weapon for attacking an enemy homeland with a nuclear warhead-and the similar Soviet Navy's cruise missile efforts. Prior to Regulus a few of the world's submarines had deck guns that were employed for assaulting coastal targets; indeed, the British built a class of submarine monitors with large-caliber guns for attacking coastal targets. After the Regulus more advanced cruise missiles and ballistic missiles were sent to sea in submarines to attack an enemy's cities and military-industrial installations. Certain U.S. and Soviet/Russian land-launched, nuclear-armed cruise missiles also are examined in this book in the context of their being competitive with sea-based missiles for their roles and for resources. Also, at times the technology of one service's missiles was considered for use by another service. The U.S. Navy's rapid and successful development of the Polaris Submarine-Launched Ballistic Missile (SLBM) and budgetary constraints caused the cancellation of advanced submarine-launched cruise missiles-the Regulus II as well as the follow-on Rigel and Triton. Submarines armed with the Regulus I missile continued on patrols in the North Pacific until mid-1964, when they were replaced on the 'deterrent' role by Polaris missile submarines. The Soviet Navy continued the development and deployment of anti-ship cruise missiles, which retained some land-attack capabilities. Following the retirement of Regulus in 1964 strategic cruise missile development in the U.S. Navy experienced doldrums. In the 1970s development of U.S. Navy land-attack cruise missiles resumed with the Tomahawk, initially designed as "theater" land-attack weapon with a nuclear warhead. Significantly, the Tomahawk was designed from the outset of the program to be launched from standard, 21-inch (533-mm) submarine torpedo tubes. While the Tomahawk was developed specifically for naval use from surface ships and submarines, subsequently a land-launched version was developed as a theatre nuclear weapon named Gryphon for the U.S. Air Force as a counter to Soviet theater nuclear weapons in Eastern Europe. (The Tomahawk also was suitable for aircraft launch, although neither the U.S. Air Force nor Navy adopted that concept.) Subsequent Tomahawk variants with conventional warheads were developed for the land-attack and anti-ship missile roles. Sea-based Tomahawk missiles with conventional warheads-launched from surface ships and submarines-were employed extensively and very effectively in the Gulf War (1991) and in several subsequent conflicts and crises. The Soviet Navy's cruise missile programs have a similar development history and that effort has produced several land-attack weapons.
Visa hela texten

In October 1962, the placement of Soviet missiles in Cuba presented such a threat that the U.S. risked war to attain their removal. Yet as Norman Polmar and John O'Connell masterfully detail, the Soviets successfully worked to attain this capability through other means. Strike from the Sea brings new understanding to the evolution of the nuclear strategic balance during a crucial period of the Cold War." --David F. Winkler, Ph.D., co-author To Defend and Deter: The Legacy of the United States Cold War Missile Program "A fascinating history and analysis of the cruise missile weapons system which introduced the era of guided missiles, this book looks at the weapon that was eclipsed in the U.S. (but not the Soviet Union) for decades by the ballistic missile, and which has now come back in a modern form, to present potential strategic challenges to the nation, and fresh challenges to the U.S. Navy." --RADM Thomas A. Brooks USN (Ret.), former Director of Naval Intelligence, co-author of Admiral Gorshkov: The Man Who Challenged the U.S. Navy "Authoritative, masterfully written, and drawing from the experiences and knowledge of naval officer John O'Connell and the vast breadth of knowledge of historian and analyst Norman Polmar, this is a must-have book on one of the most critical developments of modern naval armament." --James P. Delgado, maritime archaeologist, historian and author of War at Sea: A Shipwrecked History "Norman Polmar and John O'Connell have provided an in-depth and fascinating look at the history and evolution of submarine-launched cruise missiles from both sides of the Iron curtain. This topic is not only of historical interest, but an issue increasingly back in focus in the age of great power competition." --Magnus Nordenman, author of The New Battle for the Atlantic: Emerging Naval Competition with Russia in the Far North

Norman Polmar is an analyst, consultant, and author specializing in naval, aviation, and intelligence subjects. Has served as an advisor/consultant to three U.S. Senators, the Speaker of the House, and three Secretaries of the Navy. He has written or co-authored more than 50 published books, including four editions of Guide to the Soviet Navy and nine editions of Ships and Aircraft of the U.S. Fleet. He has served in the Secretary of the Navy's Research Advisory Board and served as chairman of the Science and Technology Advisory Board of the Department of Homeland Security. As a naval officer, John O'Connell served in an aircraft carrier and heavy cruiser, and, subsequently, 22 years in submarines, including a Regulus missile submarine, and commanded a submarine and a submarine division. He served as U.S. Defense and Naval Attache in Tokyo from 1978-1981. He authored three books on air power and two books on submarines and served as a docent at the National Air and Space Museum for two decades.