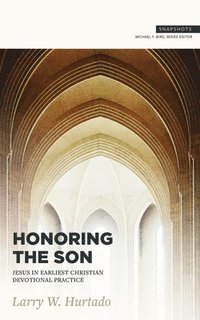 av L W Hurtado
Häftad Engelska, 2018-06-27
189
Köp
Spara som favorit
Skickas inom 5-8 vardagar.
Gratis frakt inom Sverige över 159 kr för privatpersoner.
Finns även som
Visa alla 1 format & utgåvor
Larry W. Hurtado has been one of the leading scholars on early Christology for decades. In Honoring the Son: Jesus in Earliest Christian Devotional Practice, Hurtado helps readers understand early Christology by examining not just what early Christians believed or wrote about Jesus, but what their devotional practices tell us about the place of Jesus in early Christian worship. Drawing on his extensive knowledge of early Christian origins and scholarship on New Testament Christology, Hurtado examines the distinctiveness of early Christian worship by comparing it to both Jewish worship patterns and worship practices within the broader Roman--era religious environment. He argues that the inclusion of the risen Jesus alongside the Father in early Christian devotional practices was a distinct and unique religious phenomenon within its ancient context. Additionally, Hurtado demonstrates that this remarkable development was not invented decades after the resurrection of Christ as some scholars once claimed. Instead, the New Testament suggests that Jesus--followers, very quickly after the resurrection of Christ, began to worship the Son alongside the Father. Honoring the Son offers a look into the worship habits of the earliest Christians to understand the place of Jesus in early Christian devotion.
Visa hela texten

I have a love-hate relationship with this elegant summary of Larry Hurtado's massive scholarly contribution to earliest Christian understandings of Jesus. On the one hand, I can't wait to get Honoring the Son into the hands of my students because it puts in front of them all of his best thinking; on the other hand, I have been reading Hurtado's works for 30 years, book by book, article by article. Need I say it took lots of work to read his body of work? Need I say now that we have all his major thoughts now available in one evening's reading? One generation's efforts are the next generation's beginning points, so start here. You'll rise up and call me blessed! --Scot McKnight, Julius R. Mantey, Professor of New Testament, Northern Seminary Larry Hurtado stands out as one of the most influential scholars in the study of earliest Christianity. Honoring the Son captures his basic insights, revealing the motors that drove early Jesus-devotion as it drew on Jewish theological resources and infiltrated the Roman world. Easy to read but full of substance, this little book is "the pocket Hurtado" that will benefit readers of all kinds. --Bruce Longenecker, Melton Chair of Religion, Baylor University Honoring the Son is a wonderfully clear distillation of decades of research and writing done by Larry Hurtado on the issue that he, more than any biblical scholar, has brought to prominence in the study of early Christology: devotional practice offered to Jesus along with God by monotheistic Jews within the first two decades of Christianity. Those readers who are unfamiliar with Hurtado will find here an introduction to this important subject that is accessible and succinct. This slim volume is packed with observations and conclusions that are both historically sound and theologically profound. --Charles A. Gieschen, Professor of Exegetical Theology, Concordia Theological Seminary "It is thirty years since Larry Hurtado's first book on early Christian devotion to Jesus burst upon the scene--and changed everything scholars previously assumed about the development of Christology and even Christianity itself. Over the last three decades, Hurtado has followed that up with ever larger and more detailed volumes, demonstrating the evidence for his view that the first Christians, despite their Jewish identity, worshipped Jesus alongside God the Father. In this little book, Hurtado sets out the steps of his main argument clearly and logically with admirable precision and conciseness, undergirded by years of scholarship and setting it within current academic debate. This book is a godsend (literally!) to the thinking believer and the inquiring searcher alike--and is greatly to be welcomed and applauded." --The Revd Canon Prof Richard Burridge, FKC, The Dean of King's College London and Professor of Biblical Interpretation When I was taking a course on the history of New Testament interpretation in 1990, we read Wilhelm Bousset's book on the emergence of the worship of Jesus as Deity as the landmark work. In the same course today, we would be reading Bousset alongside Larry Hurtado, often in point-counterpoint fashion. Hurtado's work on this key issue--how Jesus came to be recognized as divine--is of central importance not only to students of early Christianity but indeed to all who worship Jesus, and it is with great excitement that I hold in my hand so accessible a summary of his decades of sifting through the evidence, a book I can recommend not only to my seminary students but to everyone in my congregation who ever asks the question. --David A. deSilva, Trustees' Distinguished Professor of New Testament and Greek, Ashland Theological Seminary

Larry W. Hurtado is Emeritus Professor of New Testament Language, Literature and Theology at the University of Edinburgh, Scotland and a Fellow of the Royal Society of Edinburgh. He is the author of many books and articles, notably Destroyer of the Gods and Lord Jesus Christ.