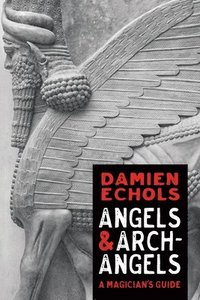 The Western Path to Enlightenment

av Damien Echols
Inbunden Engelska, 2020-05-12
209
Köp
Spara som favorit
Skickas inom 5-8 vardagar.
Gratis frakt inom Sverige över 159 kr för privatpersoner.
'Angels do not belong to any one single religion, system, or dogma,' teaches Damien Echols.' They are almost pure energy - the very substance the cosmos is made of. They're also incredibly willing to work with us if asked.' With Angels and Archangels, this bestselling author presents an essential resource for understanding what angels are, how they make themselves available, and magickal practices to invoke their power to transform your life. For the magician - or anyone seeking to enlist helping forces on the path of awakening - invoking angels and archangels gives you access to incredible potential for manifestation, healing, and spiritual growth. In this lucid and information-packed guide, Damien shares his unique understanding and experience of magickal practices refined in the crucible of his wrongful death row imprisonment. Here you'll discover: - A clear presentation of angels and archangels as they have been honored in mystical traditions for thousands of years - The names and qualities of individual angels and archangels, as associated with the elements, the Zodiac, the Tree of Life, and the Tarot - Foundational practices and meditations for building your skills with magick - How to call on angels for blessing, protection, invocation, the creation of talismans and sigils, and more - Advanced angel magick rituals, including the Rose Cross, the Celestial, and the Shem Operation - The Holy Guardian Angel - the key contact for stepping into your true nature beyond ego consciousness 'When working with angels and archangels,' says Damien, 'I've come to realise that they don't carry out the tasks we charge them with just because we ask them to - they do it because they perceive the divine within us.' Angels and Archangels is an essential resource for every magical library, an invitation by one of the most exciting modern teachers of the art to discover the enormous potential waiting for your call.
Visa hela texten

Damien Echols was born in 1974 and grew up in Mississippi, Tennessee, Maryland, Oregon, Texas, Louisiana, and Arkansas. When he was 18, Damien and two other young men were wrongfully convicted of murder, eventually becoming known as the West Memphis Three. Having received a death sentence, Damien spent almost two decades on death row, until he was released in 2011. While in prison, Damien was ordained into the Rinzai Zen Buddhist tradition. He is the subject of Paradise Lost, a three-part documentary series produced by HBO, and West of Memphis, a documentary produced by Peter Jackson and Fran Walsh. Damien is also the author of the New York Times bestseller Life After Death and Yours For Eternity (with his wife Lorri Davis). Damien teaches classes on magick around the country and works as a visual artist. His artwork entails glyphs, sigils, and symbols designed to bypass the conscious mind and speak directly to the subconscious, combining magick techniques with his own alphabet and writing system to break down concepts and scenarios into abstract designs. He and Lorri live in New York City with their three cats. For more, visit damienechols.com.