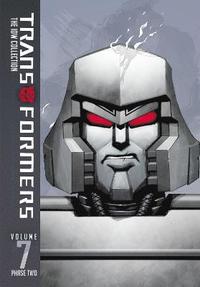 av James Roberts, John Barber, Alex Milne, Andrew Griffith
(1 röst)
Inbunden Engelska, 2018-04-17
459
Köp
Spara som favorit
Skickas inom 3-6 vardagar.
Fri frakt inom Sverige för privatpersoner.
Presenting IDW's Transformers comics in recommended reading order, including one-shots, crossovers, and event series! Everything a beginner could need, everything a diehard could want. MEGATRON assumes control of the quest to find the Knights of Cybertron-a quest that has never before been so urgent, so personal, and so likely to end in tears. But the crew of the Lost Light isn't so eager to follow his orders and, as is always the case, past decisions will come back to bite them. Plus, The AUTOBOTS return to Earth-with OPTIMUS PRIME in command! But what is bringing them back-and what terrifying secret do the humans hold? But GALVATRON is on Earth as well, with a plan to reshape it as he once did with Cybertron. A bold new era begins here! Collects issues #28-34 of More Than Meets The Eye and #28-34 of Robots In Disguise.
Visa hela texten

John Barber is a former Marvel and IDW Publishing editor now focused on writing comics. Credits include: Optimus Prime, Doctor Strange/Punisher, Ultimate Spider-Man Infinite Comics, Revolutionaries, Back to the Future, and Action Man comics! James Roberts is a British comic book writer best known for his contributions to the Transformers franchise, having worked consistently with the robots in disguise since he co-wrote the 2010 limited series, Last Stand of the Wreckers, with Nick Roche. His first solo story, the two-part "Chaos Theory," appeared in Mike Costa's ongoing Transformers title and explored the origins of Optimus Prime and Megatron's relationship. He and Costa co-plotted the series' finale, "Chaos." Roberts is best known, however, for Transformers: More Than Meets the Eye (often abbreviated to MTMTE), the ongoing series that launched in January 2012 and ran for 57 issues, plus annuals and one-shots. He writes the new ongoing series Transformers: Lost Light, which continues the events from his previous series.