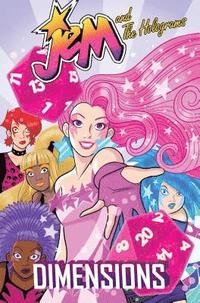 Jem and the Holograms: Dimensions

av Sophie Campbell, Kate Leth, Sam Maggs, Sarah Winifred Searle
(1 röst)
Häftad Engelska, 2018-06-05
161
Köp
Spara som favorit
A brightly-illustrated relaunch of a beloved vintage cartoon that uses vibrant storytelling to address issues familiar to today's young readers. Jem and the Holograms get back to their rock 'n' roll roots in this new series of stand-alone stories from some of comics' most popular creators, including fan-favorite artist Sophie Campbell, who helped define the look of the series in 2015 with her redesigns for the characters and the musical tone she brought to the book. A celebration of creativity, friendship, and being true to yourself, Dimensions is full of humor, fun, and characters that radiate positivity. These uplifting stories will bring a smile to readers faces even as they put a song in their hearts. All your favorite characters-and some new ones!-take the stage in stories about everything from Dungeons & Dragons to ski trips gone wrong! An anthology series from Sarah Gaydos, the Eisner Award-winning editor of Love is Love.
Visa hela texten

"A showcase for some of comics' best current talents... (and) a worthy collection of bite-sized stories." -Rogues Portas

Sophie Campbell began her career writing and drawing well-received independent comics including Wet Moon, Shadoweyes, and The Abandoned. She further proved her versatility as an artist when she began drawing the Teenage Mutant Ninja Turtles for IDW, where her kinetic action sequences and distinctive character art were a hit with fans and critics alike. Campbell was the first artist on the IDW continuing series Jem and the Holograms, where she gave the characters a modern redesign and established the unique look of the comic. She continues to work on several projects for IDW, as well as her own independent comics. Kate Leth is a bestselling writer and cartoonist living in LA, by way of Canada, specializing in teen and all-ages stories for both page and screen. She's written Patsy Walker AKA Hellcat for Marvel, as well as series such as Vampirella, Girl Over Paris, Edward Scissorhands, Fraggle Rock and three Adventure Time graphic novels. Her creator-owned works include the all-ages Power Up from Boom Studios, the romantic high school adventure School Spirit, and the supernatural teen thriller Spell on Wheels from Dark Horse.