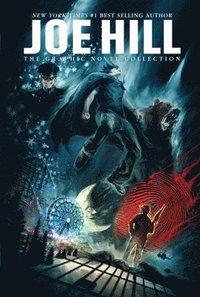 "This (The Cape) haunting tale is unlike anything else you are reading." -Comic Book Resources "The art is vesceral, the palette is grungy, the hero is all-American, and the situation is grim." -Comic Bastards, reviewing The Cape: 1969 "Terrifying at its core, horror fans should definitely pick up." -Bloody Disgusting, reviewing Wraith "This series is monstrously surreal and a hell of a lot of fun." -Big Comic Page, reviewing Wraith "Thumbprint is a pyschological thriller that delivers on all fronts." -Comic Book Therapy

Joe Hill is the #1 New York Times bestselling author of Full Throttle, The Fireman, Heart-Shaped Box, and NOS4A2, recently made into a TV series from AMC. His horror novella In the Tall Grass, co-written with Stephen King, was made into a feature film from Netflix. His book of short stories, 20th Century Ghosts, won the Bram Stoker Award and British Fantasy Award for Best Collection. He earned the Eisner Award for Best Writer for his long-running comic book series, Locke & Key, featuring the eye-popping art of Gabriel Rodriguez.