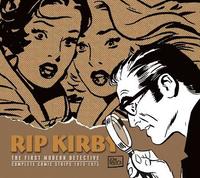 av Fred Dickenson
Inbunden Engelska, 2019-07-16
719
Köp
Spara som favorit
Skickas inom 3-6 vardagar.
Fri frakt inom Sverige för privatpersoner.
In these 11 stories, Rip Kirby takes part in an oldstyle shootout in a nearlydeserted Western ghost town, battles the deadly Owl and the Pussycat over a hidden stash of heroin, and rubs a magic lamp the wrong way in a Turkish bazaar. After learning he is the doppelganger of the crown prince of a postage stampsized country, the bespectacled detective follows the trail of a counterfeit two million before being framed by a paroled con man who wants to get even with Rip for making him play second fiddle in the prison orchestra. Plusthe long awaited return of the Rip's original girlfriend, Honey Dorian, as well as his archnemesis, the deadly Mangler! The more than 800 sequential comics from January 22, 1973 to October 11, 1975 also feature Rip's new girlfriend Holly Glowstep, and standbys such as Desmond, Wiggins, and Ma Casino.
Visa hela texten

"John Prentice's work is superb. He's one of the few cartoonists who took an important strip by a great cartoonist and did it not only justice, but in some ways, was as good as--and in some cases better than--the originator." -Tom De Haven, author of the Derby Dugan trilogy

John Prentice (1920-1999) received the National Cartoonists Society award for "Best Story Strip Cartoonist" in 1966, 1967, and 1986. Born in Whitney, Texas. He joined the Navy in 1939 and survived the bombing of Pearl Harbor on December 7, 1941, served on two destroyers in eight combat campaigns, and was honorably discharged in 1945. After the war he enrolled in the Art Institute of Pittsburgh and then moved to New York, where he eventually became a successful freelancer, illustrating paperback book covers; comic books for the Joe Simon/Jack Kirby studio, DC Comics, and others; as well as being a regular contributor to major magazines before taking over Rip Kirby in 1956.