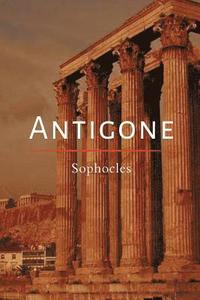 The setting of the play is Thebes. Polynices, son of Oedipus, has led a rebellious army against his brother, Eteocles, ruler of Thebes. Both have died in single combat. When Creon, their uncle, assumes rule, he commands that the body of the rebel Polynices be left unburied and unmourned, and warns that anyone who tampers with his decree will be put to death.

Antigone, sister of Polynices, defies Creon's order and buries her brother, claiming that she honors first the laws of the gods. Enraged, Creon condemns her to be sealed in a cave and left to die. How the gods take their revenge on Creon provides the gripping denouement to this compelling tragedy, which remains today one of the most frequently performed of classical Greek dramas.

The curse placed on Oedipus lingers and haunts a younger generation in this new and brilliant translation of Sophocles' classic drama. The daughter of Oedipus and Jocasta, Antigone is an unconventional heroine who pits her beliefs against the King of Thebes in a bloody test of wills that leaves few unharmed. Emotions fly as she challenges the king for the right to bury her own brother. Determined but doomed, Antigone shows her inner strength throughout the play.
Visa hela texten