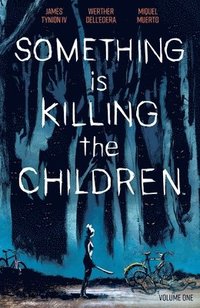 Something is Killing the Children Vol. 1

av James Tynion Iv
(1 röst)
Häftad Engelska, 2020-06-25
153
Bevaka
Spara som favorit
Tillfälligt slut – klicka "Bevaka" för att få ett mejl så fort boken går att köpa igen.
Finns även som
Visa alla 1 format & utgåvor
When children begin to go missing in the town of Archer's Peak, all hope seems lost until a mysterious woman arrives to reveal that terrifying creatures are behind the chaos - and that she alone will destroy them, no matter the cost. IT'S THE MONSTERS WHO SHOULD BE AFRAID. When the children of Archer's Peak-a sleepy town in the heart of America-begin to go missing, everything seems hopeless. Most children never return, but the ones that do have terrible stories-impossible details of terrifying creatures that live in the shadows. Their only hope of finding and eliminating the threat is the arrival of a mysterious stranger, one who believes the children and claims to be the only one who sees what they can see. Her name is Erica Slaughter. She kills monsters. That is all she does, and she bears the cost because it must be done. GLAAD Award-winning writer James Tynion IV (The Woods, Batman: Detective Comics) teams with artist Werther Dell'Edera (Briggs Land) for an all-new story about staring into the abyss. Collects Something is Killing the Children #1-5.
Visa hela texten

James Tynion IV is the GLAAD award-winning writer behind BOOM! Studios hit original series Wynd, The Woods, and The Backstagers. He's also earned acclaim for his work on Batman, Batman: Detective Comics, Justice League and more of the top-selling series at DC Comics along with his Image Comics series, Department of Truth. Something is Killing the Children debuted as the highest-selling original comic book series launch in BOOM! Studios history and has continued to grow readership and sales well into its second year with issue #11 outselling #1 and issue #16 outselling #11. Something is Killing the Children was nominated for a 2020 Eisner Award in the "Best New Series" category. Tynion's property Department of Truth was announced as optioned by Sister, the production company co-founded by Elisabeth Murdoch, Stacey Snider, and Jane Featherstone, for development in both film and television. Werther Dell'Edera (born January 1, 1975) is an Italian comic book artist who provided interior art for the unreleased comic Aliens: Colonial Marines - Rising Threat for Dark Horse Comics, as Well as Marvel Comics, and BOOM! Studios hit Something is Killing the Children.