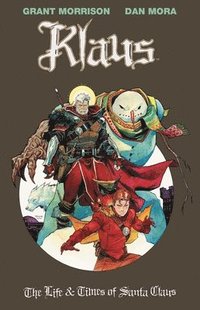 Grant Morrison, MBE is a Scottish comic book writer and playwright. They are known for their nonlinear narratives and countercultural leanings in their runs on titles including DC Comics's Animal Man, Doom Patrol, Batman, JLA, Action Comics, All-Star Superman, Green Lantern, The Flash, Vertigo's The Invisibles, and Fleetway's 2000 AD. They have also served as the editor-in-chief of Heavy Metal and currently operate as an adviser for the magazine. They are the co-creator of the Syfy TV series Happy! starring Christopher Meloni and Patton Oswalt. Morrison is also an occasional actor, with their most recent appearance being a brief cameo as a news broadcaster in the 2017 horror comedy film Mom and Dad, which starred Nicolas Cage and Selma Blair. Dan Mora is an artist whose work includes Buffyverse comics from Boom! Studios.