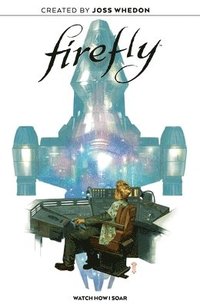 av Giannis Milonogiannis, Jorge Corona, Ethan Young, Joss Whedon
Inbunden Engelska, 2021-01-21
189
Köp
Spara som favorit
A new graphic novel exploring one of the most pivotal moments of Joss Whedon's acclaimed Firefly, as Wash realizes he's about to die and the most important moments flash before his eyes- including one that even he never expected. "I AM A LEAF ON THE WIND; WATCH HOW I SOAR" Return to the critically-acclaimed world of Joss Whedon's Firefly in an all new graphic novel spotlighting Hoban "Wash" Washburne, pilot of the spaceship Serenity...who has just realized he's about to die. As Wash's life flashes before him, he revisits the most important, never before revealed moments in his life, from growing up on a planet so ravaged by pollution that no star could shine in the sky to meeting the woman of his dreams in Zoe, who would become his wife and create a life with him beyond his wildest imagination. And in those final moments, Wash will reach out to connect with a surprising someone he never thought possible to meet...proving that some bonds transcend our mortal coils. From award-winning and critically acclaimed writers and artists, including Jeff Jensen, Ethan Young, Jared Cullum, Jorge Corona, and Giannis Milonogiannis, discover the unforgettable untold stories of the 'Verse's most lovable hero and how love survives even after death.
Visa hela texten

Joseph Hill Whedon is an American film director, producer, writer, and composer. He is the founder of Mutant Enemy Productions, co-founder of Bellwether Pictures, and is best known as the creator of several television series. These include Buffy the Vampire Slayer (1997-2003), Angel (1999-2004), Firefly (2002), Dollhouse (2009-2010), and Agents of S.H.I.E.L.D. (2013-2020). Whedon co-wrote for the Pixar animated film Toy Story (1995) (for which he was nominated for the Academy Award for Best Original Screenplay), wrote and directed the Firefly film continuation Serenity (2005), co-wrote and directed the Internet miniseries Dr. Horrible's Sing-Along Blog (2008), and co-wrote and produced the horror comedy film The Cabin in the Woods (2012). He wrote and directed the Marvel Cinematic Universe superhero films The Avengers (2012) and its sequel Avengers: Age of Ultron (2015), and also co-wrote the script for the DC Extended Universe superhero film Justice League (2017). He also served as director for Justice League on re-shoots, replacing Zack Snyder (who retained directorial credit). Actors Ray Fisher, Charisma Carpenter, Michelle Trachtenberg and Amber Benson have complained publicly about Whedon's behavior on set. WarnerMedia investigated Fisher's allegations and announced that they had taken "remedial action" in December 2020.